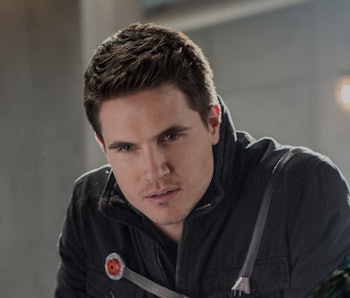 The Flash returned to The CW last night with “The Once and Future Flash.” Though Barry (Grant Gustin) had no luck finding out Savitar’s true identity in 2024, Killer Frost (Danielle Panabaker) got a good look at the man inside the suit back in 2017, and the fact that they’re teaming up is fueling the newest theory that Savitar is her supposedly dead husband, Ronnie Raymond (Robbie Amell).

You might remember Ronnie Raymond as the OG Firestorm who was fused with Professor Martin Stein in the wake of the particle accelerator explosion that kicked the series off. Stein now pairs up with Jefferson Jackson in Legends of Tomorrow because, in the Season 2 premiere, we learn that Ronnie sacrificed himself to stop the singularity that appeared over Central City in the final moments of Season 1. Though it’s at least Ronnie’s second “death,” it hits Flash hard and he temporarily disbands the team to rebuild coffee shops in Season 2 (which is similar to what Emo Barry did in “The Once and Future Flash”).

Firestorm separates himself back into Ronnie and Professor Stein, and the explosion closes the wormhole. Barry is able to catch the falling professor, but Ronnie is never seen again. The body isn’t even recovered, and the fact that the show never followed through on what exactly happened to Ronnie was a bit surprising.

Later in the season, Jay Garrick from Earth-2 remembers in “Flash of Two Worlds” how that singularity actually functioned as a massive breach between Earth-1 and Earth-2. Though we eventually learn that Jay was the evil Zoom all along, making it hard to trust what he’s saying, the part about the breach seems true enough. It’s how he was able to get to Earth-1 in the first place, so it stands to reason that Ronnie might have been blasted into Earth-2 or somewhere else entirely.

Remember that Savitar has a serious vendetta against Barry for a reason. After Barry asks what he wants, he says, “Everything! Everything you took from me, I want it back. And I’m gonna take it back. Then, I will destroy you.” Perhaps Ronnie had to sacrifice himself to save Central City, losing Caitlin in the process, because of Barry’s actions or his inability to stop the singularity himself. If that is the case, partnering up with Caitlin/Killer Frost at the end of “The Once and Future Flash” is Ronnie taking everything he lost back, and the next step is destroying the Flash. Rather than fuse with a new Firestorm partner, perhaps the Savitar speedster suit is his only means of survival.

The most telling detail that fuels the “Ronnie is Savitar” theory is Killer Frost’s reaction when he reveals his identity to her. “Why should I trust you?” she asks him. When he steps out of his Savitar suit, her entire expression changes in shock, awe, and realization. It’s clear that she recognizes who it is. She immediately says, “What do you need me to do?” Who else could possibly make the ice cold Killer Frost fall in line so quickly?

Whoever Savitar actually is, it seems like Barry and viewers of The Flash will finally learn next week when it airs on Tuesday at 8 p.m. Eastern on The CW.