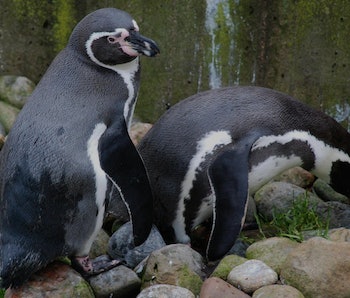 Unlike other holidays which dates don’t coincide with any actual event — we’re looking at you, Earth Day — World Penguin Day marks Antarctic penguins’ annual march to their ancestral breeding grounds as autumn turns to winter in the Southern Hemisphere. This migration, in which Antarctic penguins of breeding age travel inland from their usual sea habitat, was featured in the 2005 documentary March of the Penguins, which helped cement the resiliency of emperor penguins in the minds of the public.

Sure, these lil dudes are cute as heck, but they’re also impressive survivors. When male and female penguins meet at their breeding grounds to do the deed and produce a single egg per pair, the mates form a strong bond as they collaborate to care for the egg and then the chick once it hatches. These pairs endure brutally cold temperatures and long journeys back and forth to the water to bring back food. The males live for months off their fat supply, losing up to 50 percent of their body weight over four months.

So in honor of these flightless birds on their special day, we’ve rounded up five Inverse stories that show just how awesome they are.

5. Penguin Parents Have Trouble Getting Their Big Boys to Feed Themselves

We all know that person who’s just a little too old to live in their parents’ house. Well, it turns out penguins have the same problem too. Penguins will feed their offspring long after the chicks are mature enough to fish. So just like adolescence extends long beyond the teenage years for some humans, apparently it does for penguins too.

4. Penguins Can Be Home Wreckers

3. Fat Penguins Are Less Stable, but They’re Just as Cute

2. Penguins Can Be Dicks

It’s with great caution that we apply human standards of relationships and behavior to animals. After all, our brains and evolutionary histories are so much different from penguins. But when we see one penguin smacking another penguin in the head, it’s hard to not draw a comparison to America’s Funniest Home Videos or Candid Camera.

We all know — or should know — that there are no penguins on the North Pole and no polar bears on the South Pole. For penguins, that’s a very good thing. But we also know that there used to be an Arctic penguin, and there may have even been an Antarctic polar bear. Due to the slow pace of evolution, though, it’s unlikely that we’ll ever see polar bears and penguins in the same place again.

So on this World Penguin Day, take a moment to appreciate how freaking awesome penguins are.

More like this
Science
Oct. 2, 2022
Climate change could make one household pest increase its path of destruction
By Lucas Cernusak, Amy Zanne, Alexander Cheesman and The Conversation
Science
Sep. 20, 2022
Extreme heat linked to harassment at work, study reveals
By Tara Yarlagadda
Science
Oct. 2, 2022
Even if geoengineering worked, over half the world could keep heating up
By Patrick W. Keys, Curtis Bell, Elizabeth A. Barnes, James W. Hurrell, Noah Diffenbaugh and The Conversation
Related Tags
Share: