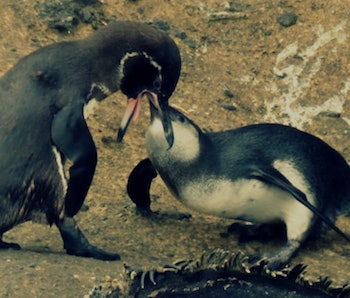 Human parents complain that their adult children never stop mooching. Needy millennial kids try to live off mom and dad long after they become grown-ass adults, taking public transit home on weekends to do laundry and raid the kitchen. As it turns out, we’re not the only species that depend on our parents after we’ve moved out: Scientists have found that grown-up penguins don’t stop begging their parents for food, and penguin moms and dads continually oblige.

In a paper recently published in The Wilson Journal of Ornithology, University of Washington biology professor Dee Boersma described this uncomfortably real scenario. She describes seeing fledgling Galapagos penguins — the species endemic to the famed islands — walking up to fully grown adults, asking for food, and receiving some in the form of regurgitated chow. In all five of these situations that she saw, Boersma assumed that the “compliant adult” was the juvenile’s parent, based on the latter’s “begging” behavior.

Fledglings are essentially adults without the characteristic markings — much like twenty-something humans without adulthood’s characteristic wrinkles and paunch. They’re so named because they have left home, or “fledged the nest.” It’s not entirely clear why their parents are so willing to help them.

“Through field seasons over the years when we were observing penguin behavior in the Galapagos Islands, we saw these isolated instances of adults feeding individuals who had obviously fledged and left the nest,” Boersma said in a statement. “And now we’ve collected enough field observations to say that post-fledging parental care is a normal — though probably rare — part of Galapagos penguin behavior.”

Boersma has some theories about why these penguins are particularly generous with their mooching offspring. One of the most important factors to consider in this situation, she writes, is the penguins’ environment: The Galapagos Islands sit on a chain of volcanoes near the equator, where conditions involve freezing ocean currents and blistering heat. This variability is reflected in the food supply; while some ocean patterns will create a bounty of fish, El Nino conditions may trigger a famine. Boersma thinks that the penguins evolved to take advantage of this variation in food supply — not only by stocking up on food themselves when supplies are rich, but also by making sure that their kin partakes in a seafood buffet when it’s available.

However, just as in young adult humans, the question remains: Why can’t the fledglings just get their own damn food? It’s possible, Boersma says, that the parents are willing to provide for their young because they think the kids are still figuring out how to hunt.

Are these penguin kids just excessively lazy? Do some penguin parents simply spoil their kids? There’s still a lot to discover about the Large Adult Sons of these penguins — perhaps, most pertinently, whether they grow up to be functional adults, or whether they’re doomed to a lifetime of prolonged adolescence.

More like this
Science
7.31.2022 1:00 PM
How do cats co-exist with each other? The answer may lie in their gut
By Tara Yarlagadda
Science
8.10.2022 3:00 PM
Watch sea sponges sneeze out stringy mucus in slow motion
By Jennifer Walter
Science
8.9.2022 10:30 AM
Is my dog depressed or happy? Pet experts explain how you can tell.
By Tara Yarlagadda
Related Tags
Share: