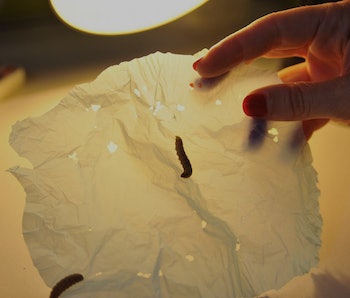 Science is riddled with lucky accidents and accidental discoveries. The most recent: A scientist and an amateur beekeeper accidentally discovered that wax worms, which normally feast on beeswax and honey, are also capable of digesting plastic bags.

Federica Bertocchini, a research biologist with the Spanish National research Council, came upon a colony of wax worms feasting on honeycomb panels stored in her house. “I removed the worms, and put them in a plastic bag while I cleaned the panels,” she says in a release. “After finishing, I went back to the room where I had left the worms and I found that they were everywhere. They had escaped from the bag even though it had been closed and when I checked, I saw that the bag was full of holes. There was only one explanation: The worms had made the holes and had escaped. This project began there and then.”

Current Biology published the findings on Monday. Further experiments found that 100 wax worms broke down 92 milligrams of plastic in 12 hours. That doesn’t sound like much, but it’s miles ahead of other biodegradation processes. Experiments with degrading plastic using fungus and bacteria have failed to produced measurable decomposition over that timescale. Left alone, plastic bags take at least centuries to decompose, or as long as forever under certain environmental conditions.

The secret to this wax worm superpower is likely a digestive enzyme that the larva uses to break down wax, which has a similar carbon-carbon bond to the one found in polyethylene plastic. This enzyme may be produced by the worm itself, or perhaps by the microorganisms inside its gut. Either way, it seems actual chewing isn’t necessary — when the scientists smeared worm guts on plastic, it produced a similar effect. The worms even secrete the chemical after they have cocooned, it seems.

Bertocchini hopes to identify the enzyme and, hopefully, find a way to synthesize it cheaply in a lab so that it can be produced on a large scale. The outcome of the reaction between plastic and the enzyme is ethylene glycol, the active ingredient in most types of antifreeze, and a raw material used in the manufacture of polyester products, including clothing and plastic pop bottles. Currently fossil fuels are used in the industrial production of ethylene glycol — if this research goes well, recycled plastics could meet this demand instead.

Don’t expect the wax worm to somehow gobble up the world’s enormous plastic problem, though. Even if its digestive enzyme could be produced in large quantities and very cheaply, it’s not like we could just dump a whole bunch in the ocean and watch the garbage disappear. The costs of such of a scheme are sure to be enormous, and the environmental risks unfathomable.

The world’s plastic garbage problem is not so much a technical one — we know how to recycle plastic, we even know how to turn it back into usable fossil fuel. The problem is that it’s still way easier and cheaper to put plastic out into the world than it is to call it back. Wax worms may one day offer a way to get rid of some of it, but until we stop dumping it out onto the world in the first place, we can’t hope for these little larvae to save our wasteful butts.

Plastics are synthetic polymers derived from fossil oil and largely resistant to biodegradation. Polyethylene (PE) and polypropylene (PP) represent ∼92% of total plastic production. PE is largely utilized in packaging, representing ∼40% of total demand for plastic products (www.plasticseurope.org) with over a trillion plastic bags used every year. Plastic production has increased exponentially in the past 50 years (Figure S1A in Supplemental Information, published with this article online). In the 27 EU countries plus Norway and Switzerland up to 38% of plastic is discarded in landfills, with the rest utilized for recycling (26%) and energy recovery (36%) via combustion (www.plasticseurope.org), carrying a heavy environmental impact. Therefore, new solutions for plastic degradation are urgently needed. We report the fast bio-degradation of PE by larvae of the wax moth Galleria mellonella, producing ethylene glycol.