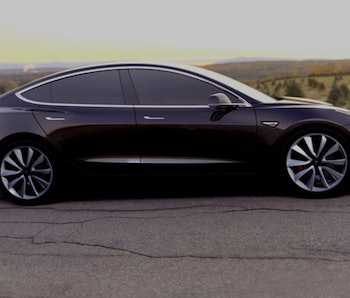 Tesla is making a big change to its manufacturing process to ensure it meets its ambitious deadline to start Model 3 production. The company will skip the “soft tooling” stage, where automakers test low-grade equipment that can be modified ahead of full production. This stage normally allows manufacturers to make changes before ordering the permanent tools, but Tesla had a bad experience last time it tried soft tooling.

The company tried soft tooling with the Model X sport utility vehicle. Deliveries of the vehicle started in September 2015, nearly two years behind schedule. Even after the launch, Tesla’s woes didn’t end there. Customers receiving some of the first batch of vehicles reported problems with the falcon wing doors and touchscreen controls.

“Soft tooling did very little for the program and arguably hurt things,” a source told Reuters in a report published Monday.

Tesla can skip the soft tooling process with fewer repercussions for two reasons. The first is that the company has improved on its ability to modify permanent tools since the Model X. The second is that it can make tools 30 percent faster than its competitors at lower cost, thanks to the 2015 purchase of a Michigan tooling company.

The company plans to ramp up car production to far higher levels than it’s seen before. Tesla produced 25,418 vehicles in the first quarter of 2017, the most it’s ever produced. With the Model 3, Tesla wants to take this further: it’s aiming to produce 500,000 cars per year by the end of 2018, half of which will be the Model 3.

Model 3 production is expected to start in July, and the company is anticipating much higher demand than it experienced with previous vehicles. Its $35,000 starting price tag will make it the company’s cheapest vehicle by a wide margin. The Model S, Tesla’s current cheapest car, starts at $68,000.

Beyond a simplified tooling process, Elon Musk has drawn on other aspects of the Model S and X production experience to simplify Model 3 assembly. For example, the Musk told investors in February that the upcoming car would have just 1.5 kilometers of wiring, where the Model S has double that. The car also lacks many of the “bells and whistles” found in the company’s previous models, like one touchscreen instead of two.

“These reduce the risk substantially in the ramp and make it just easier to scale,” Musk said on the call.

Time will tell whether these decisions are enough.