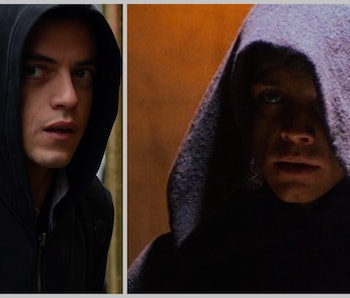 It’s been rumored a hacker (or “slicer”) will appear in Star Wars: The Last Jedi, but an Earthling hacker might make his mark on a future standalone Star Wars movie. Sam Esmail, the creator of Mr. Robot is rumored to be writing a Star Wars script.

On April 22, an article published by Omega Underground claimed to have been in contact with “two separate sources” from Lucasfilm who both said that the studio is considering a standalone script written by Esmail. Star Wars Fans are already wondering if this script could be the long-rumored Boba Fett standalone film. In some ways, a Boba Fett film would be a perfect fit for Esmail, seeing as the writer created Elliot Alderson, a consummate loner and cyber-mercenary. However, some sites are also suggesting that Esmail could be tapped to write an Obi-Wan Kenobi standalone movie. Part of the reasoning behind Esmail’s connection to Star Wars is because he has business ties to agent Bryan Lourd, father of Billie Lourd, who is, of course, the late Carrie Fisher’s daughter.

During Star Wars Celebration in Orlando Florida, Lucasfilm executive Kathleen Kennedy suggested that the nature of the next spin-off movie — slated for release in 2020 — could come very soon: “I think we’re getting close. My hope would be sometime around the summer,” she said.

If Esmail does write the next big Star Wars film, fans might have a whole new idea of the dark side; the writer has publicly compared the second season of Mr. Robot to The Empire Strikes Back.

The third season of Mr. Robot is expected to air in October 2017 on USA.