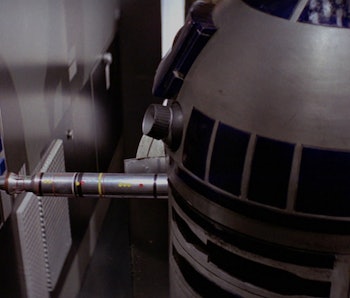 An “expert slicer” will hack their way though the computers in a galaxy far, far away, and they might wear a space tuxedo while doing it. Justin Theroux is rumored to be joining the cast of The Last Jedi as the Star Wars universe version of a hacker.

On Tuesday, Making Star Wars reported that Justin Theroux will be playing a slicer in the upcoming Episode VIII: The Last Jedi and that he has a “pivotal moment.” Presumably, Theroux’s character joins a long line of space criminals, providing a much-needed service of breaking into computers. He’s also, supposedly, wearing a costume similar to Indiana Jones from Temple of Doom. If any of this is true, this will be the first “slicer” to appear in a live-action Star Wars film. In addition to Hera on Rebels, a handful of characters have had slicing abilities in various novel and comic book canon. Though it’s still unclear if “slicers” were involved with converting the Death Star plans into a portable disc, as opposed to the bulkier “tapes” Jyn Erso was carting around in Rogue One.

Outside of the real Star Wars canon, slicers appeared as early as Timothy Zahn’s Heir to the Empire, a book which kicked off the “expanded universe” media, now collectively referred to as “Legends.” Secret codes and stolen data-tapes have long been a part of Star Wars lore, making it no surprise that there’s some kind of secret mission in The Last Jedi. Still, since a certain Rebel has proven he can slice or hack into computers really well, one wonders why the Resistance needs Justin Theroux when they already have the very reliable hacker named R2-D2.

The Last Jedi opens on December 15.