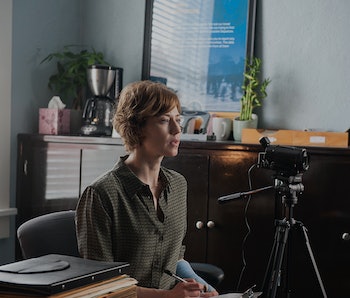 The second episode of The Leftovers’ final season, “Don’t Be Ridiculous,” takes a close look at Nora Durst. And, like most Nora-centric episodes, it zigs when you expect it to zag — and that’s saying a lot since this is already The Leftovers we’re talking about. While the episode ends with the reintroduction of Kevin Garvey Sr. and a murder in Australia, the emotional climax involves the Wu-Tang Clan.

In the first episode of Season 3, Nora seemed well adjusted and even happy. She’s at ease at her job working for the Department of Sudden Departure; she’s at ease in her family life with Kevin and their newly blended family with the Murphys. But in the second episode, when she gets a mysterious phone call offering her a chance to see her vanished children again, she lies to her work and takes a trip to meet an oddly cheerful guy in a hotel room.

As the man — Perfect Strangers actor Mark Linn-Baker playing himself — explains the particle-level specifics of a new scientific invention that allows you to go “where they went,” Nora is her usual skeptical self. She waves it off as people just vaporizing themselves in misguided suicide.

As the episode proceeds, however, she’s continuously reminded of the children she lost. She visits her former adopted baby, Lily, only to find that she doesn’t remember Nora; the airport kiosk won’t let her push the button to indicate that she’s not traveling with a baby. Tommy reminds her that he didn’t even intend for her to have Lily in the first place.

While visiting Erika Murphy — who she’s apparently stayed in touch with — she even confesses to tattooing her lost children’s names on her arm only to regret it when she realized it would inspire unwanted casual questions from others. To cover it up, she got a tattoo of the Wu-Tang Clan logo, which she’s such a fan of that she accidentally refers to as “The Wu-Tang Band.” Erika and Nora then proceed to jump on a trampoline while a song blasts in the background.

This scene, with two mothers of lost children jumping on a trampoline to the dulcet tones of the Wu-Tang Clan seems like it should be bizarre at best, laughable at worst. It’s both a satisfying emotional crescendo of Nora’s micro-journey in this episode and a suggestion for the future. By the end of the hour, when she receives another mysterious phone call telling her to meet someone in Australia if she wants to know more about this procedure, it’s hardly surprising that she says yes, no matter how much she insists to Kevin that they’re happy.

Just like Tommy, Nora’s journey is one of reaching and yearning for something intangible. In Season 2, Tommy learned the cost of finding it and saw that it wasn’t quite what he wanted. Now, in Season 3, it’s Nora’s turn.

The Leftovers third and final season is currently airing on Sunday nights on HBO.