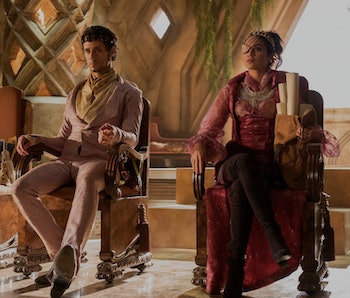 George R.R. Martin once said that “The Magicians is to Harry Potter as a shot of Irish whiskey is to a glass of weak tea.” This means the story of the magic college Brakebills University is not Hogwarts because every fantasy trope in the series is subverted as soon as it’s depicted. And the second season finale that aired on Wednesday took the notion of transgressive fantasy perhaps further than the original Lev Grossman novels. That’s because showrunners John McNamara and Sera Gamble are of the opinion that the hero’s journey — an old psychological concept of mythological storytelling — is, in their words, “bullshit.”

Spoilers ahead for all of The Magicians Season 2.

“Everyone might have a heroic moment in their lives or a cowardly moment,” McNamara tells Inverse. “And some people have the same mix of moments.” The mix he’s talking about refers not only to the season 2 finale but the entire series itself. Throughout this season, the ensemble of Quentin (Jason Ralph), Alice (Olivia Taylor Dudley), Julia (Stella Maeve), Margo (Summer Bishil), Eliot (Hale Appleman), Kady (Jade Tailor), and Penny (Arjun Gupta) have been separated and brought back together through magic, bank heists, journeys to the underworld, literal soul-searching, and death.

And at nearly every turn, characters don’t behave the way they would in a brighter, more heroic fantasy narrative. Despite the presence of magic, journeys to other worlds and encounters with dragons, the characters continue to behave like real people. “I mean, do you know any Luke Skywalkers? Do you know a real Dumbledore?” McNamara says. “I didn’t. Also, life doesn’t end in a climactic battle where the fortress blows up. Life just keeps going, and then you die.”

This bleak outlook on fantasy is on display in the way the finale plays out: After everything all the characters have gone through, the presence of magic itself is suddenly and violently taken away from not only Earth and Fillory, but all worlds at once. The Plumber (Kurtis Maguire), an unassuming character dressed in grey, saunters in, finds a kind of switch, and literally turns off magic as though all the characters forgot to pay their utility bill. “In the real world he’s the guy who serves a subpoena,” Gamble explains. “He’s unstoppable, an agent of a larger unseen power.”

If McNamara is the dark realism in The Magicians, Gamble just might represent the light. Because despite all magic being taken away from the all characters by the actions of the Plumber, the final scene of the Season 2 finale does end with a literal spark of hope: Julia’s tries to do some magic and sparks shoot from her fingers. “She does not know why she can do that,” Gamble says of the magical emission. “No one knows why yet.”

Gamble felt putting Quentin and Julia in the final scene of the episode was also essential because it brought the show back to its original premise. “We talked a lot about how it’s a mirror image of that scene in the pilot, lifelong friends, look at each other in that climactic moment and figure out what to do together,” she explained. Further proving that the show is undercutting epic fantasy cliches, she added that “after doing a big climactic season finale that was literally about killing gods and saving worlds, we brought it back to this very intimate moment between our characters.”

The relationship between Julia, Quentin, and the other characters in The Magicians represents Gamble’s desire to subvert other traditional concepts; in this case, it’s the notion that you can’t choose your family. “I always believed that strength came from the family you choose,” Gamble says. “The Magicians really has been about that from the beginning, about how the world will hand you what it hands you when you’re born and then you finally grow up enough to be able to make some of your own decisions and discern who you should trust.”

McNamara agrees that the sort of bespoke and nontraditional family units of The Magicians brought all the characters together for the finale. “I mean, they’re unified. Every single one of our main protagonists has the exact same goal. It’s almost like in terms of structure what I like to call the ‘group adventure movie,’” he says. “Let’s get together a group to do this one thing, but within the group, there’s going to be incredible disagreement on how to proceed and when to proceed.”

But, as soon as McNamara sees the light and hopefulness for the nontraditional journey of these heroes, Gamble is suddenly there to remind us again of their allergy to cliché and tropes: “Actually, they’re all pretty fucked going into Season 3.”

The Magicians Season 2 is streaming on Syfy. Season 3 is expected to air sometime in 2018.