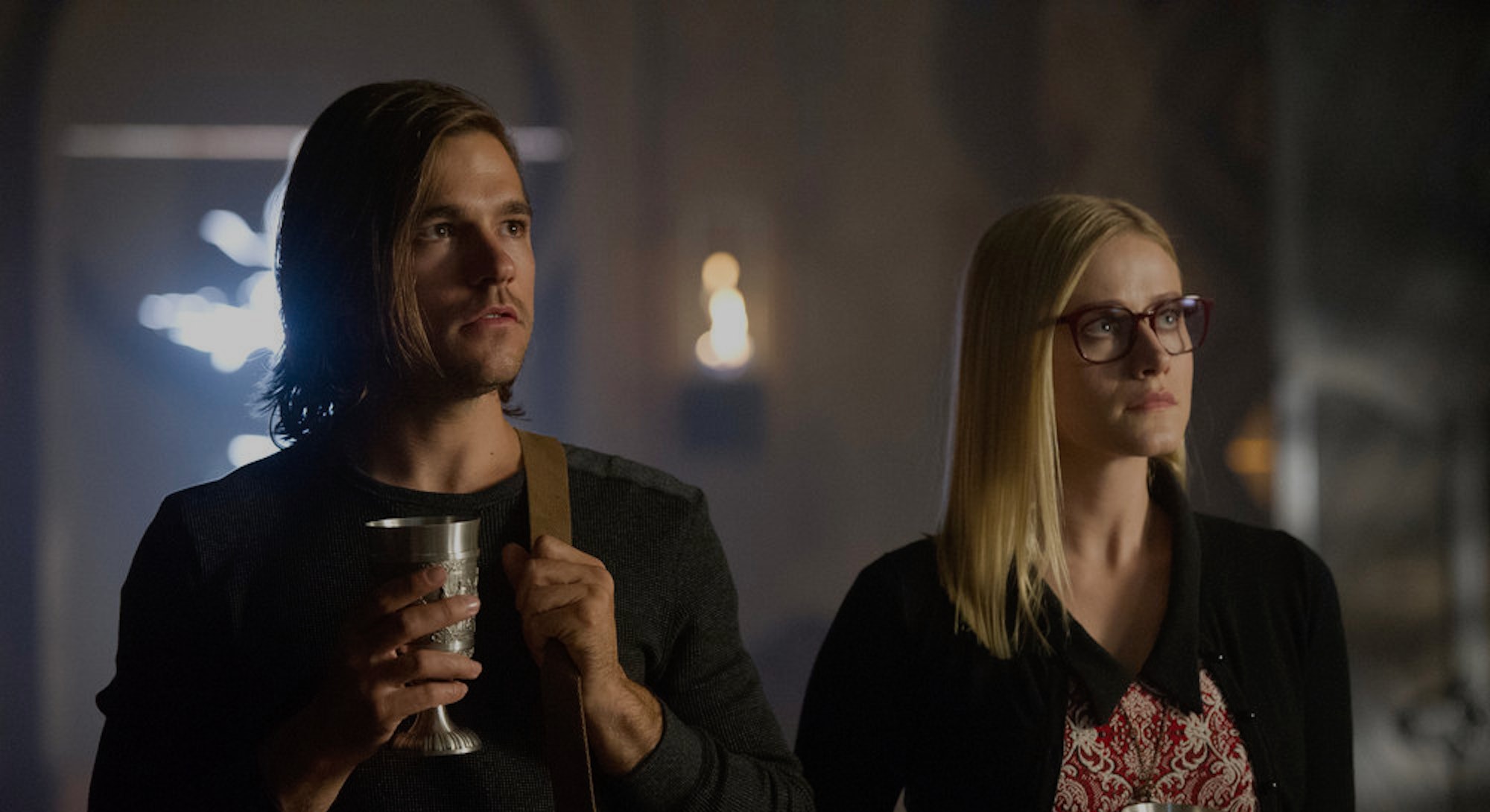 Sera Gamble and John McNamara love killing off characters. It’s been their go-to move in the second season of The Magicians, with three big characters biting the bullet in the first three episodes. Not even magic could save them, which is exactly as the gleefully murderous showrunners planned.

“Writing deaths of beloved characters is not hard. None of them — honestly,” McNamara told Inverse earlier this month. Gamble agreed, admitting that emotionally crushing the audience is actually “delightful, truly the opposite of hard. I loved writing those deaths.” The pair enjoys challenging their fans and reminding them that none of their faves are safe, which exponentially intensifies the stakes. That isn’t to say that the fantasy genre doesn’t have ways of cheating death.

Reset buttons, conveniently packaged as magical cheat sheets, are part and parcel of most fantasy worlds. Resurrection is a very tempting tool in any fantasy writer’s arsenal, and Gamble clarified that they have rules to keep the trope from turning into a Get Out of Jail Free card. The showrunners loosely take their lead from Lev Grossman’s novels, and “his world is just not a world where Buffy dies to rise again every single time,” said Gamble. A lesson learned from working on Supernatural, Gamble explained, “It’s not our intention to kill people just to bring them back on the show. Most deaths won’t be resurrected, or at least not in a form that’s going to benefit our characters.”

Instead of heroic, call-to-destiny resurrections that the likes of Gandalf or Aslan were given, the characters of The Magicians will find themselves just as cheated by rebirth as they were with life and death. Souring what is normally a reward is how the duo keep the trope from cheapening the emotional impact of losing characters. Gamble explained that, “Fantasy is really the perfect genre to talk about how we feel about death and explore the grieving process, because we have all these cool tools in our toolbox.”

Gamble and McNamara are particularly adept with their most devastating tool. “We just follow our narrative instincts. Like anything creative, the more you think consciously, the worse it is — the more you hear the doubt in your head, the more you need to go to therapy and get that out,” McNamara said.

The ideas writers have at 3 p.m. are the ones influenced by a million other questions: Will fans like this? Will the studio let us get away with this? How is it going to work practically? But the ideas that McNamara trusts the most are ones he has in the first few minutes after waking up. “That’s the idea to build a season on! The creative stuff I really think comes from the subconscious, and it takes a long time as a writer to learn how to recognize it, trust it, harness it.”

Trusting their narrative instincts led the showrunners to some surprising, twisted places in Season 2. Killing off Marina (Kasey Rohl), an expelled Brakebills student turned hedge witch who seemed poised for a redemption arc, for example, shocked fans. “In the moment it was a purely creative decision,” McNamara said. “[Marina’s death] is about pitting this very formidable woman against one of our most malevolent characters, Reynard, and watching her really holding her own,” Gamble continued.

Rohl was grateful, on the day of shooting, to be able to skip shooting the violence that undoubtedly occurred after Reynard suckled the toes of his cornered prey. Rohl focused instead on the scene immediately after Marina’s death: a brief resurrection scene. “My goal was that when she woke up, you got to see that side of Marina you never saw, which was her completely lost because she’d died, she’d been in this … I don’t know … on the day of shooting, I pictured just blackness,” she explained. “It was just a void. There’s no air, she was just burning and couldn’t breathe and there was nothing. Something like that. It was pure terror, and I think, too, the moment that she died she was probably in such terror that it informed what her beyond the veil would be like for me.”

If fans were hoping for a chance to reunite with Marina with that resurrection scene, they were sorely disappointed. Not only was Marina only alive for a scant few minutes, but also the showrunners used that time to pointedly remind everyone that there are no happy endings to be had on this show. Whatever awaits Marina — and all the characters — on the other side is no less cruel than life.

In addition to providing sinister foreshadowing, the showrunners used resurrection in another atypical way this season.

In a brutal fight scene — though perhaps not as savage as the books — Alice Quinn (Olivia Dudley Taylor) kills the Beast (Charles Measure) but is burned alive by the strength of her magic and transforms into a magical being called a niffin. Niffins, which are ghost-like impressions of a person’s magic after they’ve been consumed by their own power, have the rare opportunity to express a person’s id after death. But as Quentin quickly realizes, this tangential magic shouldn’t be confused for the human being it left behind.

Once it’s clear that Alice (or rather Niffin Alice) is about turn justice into cold-blooded murder spree, Quentin kills her almost immediately after she ends the Beast. What’s even weirder is when that magical clusterfuck of death and destruction that happened. The climatic event is the conclusion to the first novel and yet occurred, seemingly at random, in the third episode of the second season.

The pacing of these deaths and pseudo-resurrection was, in fact, another very deliberate tool the showrunners used to fuck with audience expectations. “When everything is about pace and tension, eventually you’re exhausted,” McNamara said. “You are not surprised anymore. Really great plays or movies or TV shows, they ebb and flow like life. They’re not just relentless machines of plot.”

“We’re a fantasy show that’s essentially about the difference between a childhood view and the adult view of life,” Gamble said. McNamara elaborated, “I think that childhood stories lead us to believe that you can go up against a big bad, and then you have victory until the next big bad comes out of the woodwork. It’s a very black and white construction of life versus when you grow up and realize someone can stand under a banner and say, mission accomplished, but that doesn’t actually mean the war is over. Your problems have probably just begun.”

That’s certainly the position Alice finds herself in now. The Beast died and will stay dead. Marina died, was resurrected for the most terrifying few minutes of the entire show, and fell back into whatever unspeakable horror the afterlife holds for her. But poor, sweet, sacrificial Alice — as fans of the book already know — is getting the full-service resurrection that could only happen in a fantasy world.

While this true, flesh-and-blood resurrection doesn’t happen until the end of the third Magicians novel, the TV show is taking a slightly different route. As a writer, Gamble sees the purpose of death on any show — but especially a fantasy show — as creating the lasting effect that it has on the characters who are left behind. “Alice’s death changes every other character in the way that the first time you lose a loved one that’s really close to you, you see your whole life as before and after that death,” she said. But because of her malevolent niffin form, Alice, though mourned, is never memorialized.

Fans will begin to see this psuedo-resurrection start to reverberate through the show soon. “Quentin, who has never been particularly mentally stable, feels very haunted by Alice. It’s a very visual medium. You might see her because that’s what he feels, at some point,” Gamble teased. If Quentin begins to feel like he’s losing his mind, then undoubtedly, so will the audience.

Dudley said she’s looking forward to playing that exact kind of chaotic agent in Season 2. Dudley will get to “really paint the most insane version of Alice this season. I can’t wait for everyone to see. The first season we kept her tight and closed in, but this season I get to rip all of that open and do all kinds of crazy stuff.”

With that ominous promise from Dudley came a reminder of what Gamble and McNamara are ultimately getting at when they kill and then horrifically resurrect all your darlings on The Magicians. No matter how much power, (whether magical or not) a person has, there are some problems that they’ll never be able to fix or outrun.

“There’s things worse than death, as you’ll discover,” McNamara said. Gamble, delighted, laughed along with him.