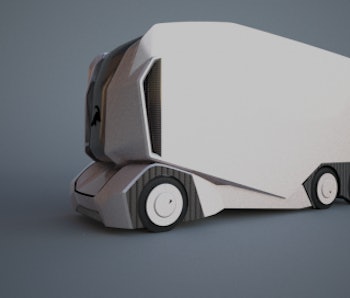 A Swedish design company, Einride, has come up with a clever concept for self-driving, totally electric freight vehicles with the full intention of completely disrupting the transportation industry.

“We are rethinking the entire supply-chain infrastructure from the ground up, creating the transport solution of the future,” reads the company website.

In the latest design unveiled on April 7, the T-Pod, is 23-feet-long and can carry 15 pallets of cargo, or about 20 tons max. Its completely electric engine can run for 124 miles straight before needing a charge. It can be calibrated for long trips or remotely controlled, a critical component considering existing self-driving trucks need a human to drive once the vehicle is off the highway.

At first glance, it looks like a cleaner, wheeled version of the Sandcrawler in Star Wars.

With no human involvement, the vehicle is able to save space for more cargo and doesn’t need windows or mirrors.

Each pod will be controlled by a remote “driver” who will monitor several trucks while they are on the highway and take over just one once it gets onto main roads.

“If you have to stand still maybe one-third of the time to actually charge, that makes the business case for having a truck driver in a battery-powered truck not that good,” said Robert Falck, CEO of Einride. “But if you remove them and create a system where the truck driver drives it remotely and controls a fleet, you overcome that problem.”

This safe approach will ensure that a situation like the scene in Logan, where the Wolverine has to rescue stray horses from getting hit by speeding driverless semis, doesn’t become a reality.

A 2014 report from several environmental groups, including the Sierra Club and Environmental Defense Fund, found that the total truck fleet in the U.S. consumed about 2.7 million barrels of fuel each day in 2013, and emitted a total of 530 million metric tons of carbon dioxide — about 12.5 percent of total U.S. carbon emissions.

“The system as a whole will reduce CO2 pollution to almost zero,” Falck said.

Other companies devoted to getting electric freight trucks on the roads are Nikola’s One, which is hydrogen powered; Siemen’s eHighway truck, which will run on an electric rail; and the Tesla Semi, which will be unveiled later this year.

“This isn’t about a new truck, it’s about a new transportation system,” said Christer Fuglesang, a Swedish astronaut and scientist, representing the company.

Einride is currently in the process of testing the trucks, but has an ambitious goal of getting a whole fleet of them, about 200 vehicles, on Swedish roads by 2020, starting with a route between the cities of Gothenburg and Helsingborg.