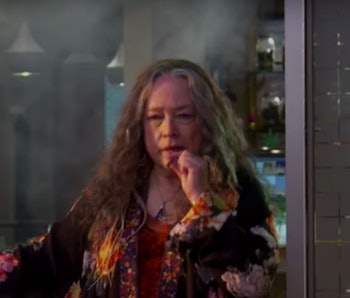 Netflix released the first teaser trailer for its new weed show Disjointed on Thursday, of all days, for some reason. Maybe, just maybe, it’s because it’s April 20. Whatever the reason, we got our first look at Ruth’s Alternative Caring, which is open for business this summer.

Disjointed, starring Kathy Bates, tells the story of Ruth Feldman, an icon in the marijuana decriminalization movement, who finally gets to realize her dreams of running a legal shop that sells cannabis. Chuck Lorre, the creator of Two and a Half Men and co-creator of Disjointed, told Variety, “The series is about what happens when [her] mission is accomplished. She is faced with running a legal cannabis establishment with her son and a staff of young budtenders. Business, family, and romance are difficult — they’re harder stoned.”

Also included in the ensemble cast of characters are three “budtenders,” Feldman’s 20-something son and a “troubled security guard.” Especially judging by the vast cloud of smoke wafting out of the door to the dispensary in the teaser trailer, we’re willing to bet that everybody is going to be high pretty much all the time.

Check out the trailer here.

Disjointed will presumably be released in its 20-episode entirety on August 25. Blaze it.