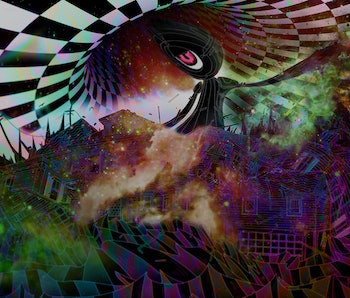 Every year on 4/20, marijuana enthusiasts light up in hopes of reaching a higher plane — miles above the dreary monotony of everyday reality. Achieving “higher consciousness,” however, has always been more of a feeling than a fact, as scientists have never been able to study whether these experiences are associated with actual changes in the brain.

On Wednesday, scientists studying consciousness at the University of Sussex released the first neurological evidence that certain drugs — they focused on LSD, psilocybin, and ketamine — do change what consciousness looks like in the brain. Several factors have made studying this difficult in the past: First of all, it’s hard to study psychedelic drugs, especially in the United Kingdom, where all psychedelic substances are illegal. Secondly, experts in the field inevitably run into one major issue: How do you measure consciousness?

In the study, published in the journal Scientific Reports, the researchers explain how they used measures of “neural signal diversity” to get around the latter issue. They already knew that in the normal “awake and aware” state, our brains fire off different types of signals at a baseline rate. They also knew that when we’re less conscious — say, sleeping, in a coma, or anesthetized — the diversity of those signals is lower than it is at baseline. What they wanted to know is whether neural signal diversity could increase above baseline.

And so they turned to psychedelic drugs, which, like marijuana, have long been associated with reaching higher consciousness. Using brain imaging data from people on psychedelics that had previously been collected by researchers at Imperial College London and the University of Cardiff, they looked for patterns in brain activity and compared it to the patterns in normal brains. What they found was the first proof that psychedelics really do change the way the brain operates at baseline.

“For all three,” — they’re referring to the aforementioned trio of psychedelics — “we find reliably higher spontaneous signal diversity, even when controlling for spectral changes,” the researchers write in the paper, noting that this is the first time that these measurements have been applied to these drugs and “yielded values exceeding those of normal waking consciousness.” They mention that they also found some evidence that the intensity of a psychedelic experience, as reported by each individual, is associated with changes in signal diversity.

In the paper, they’re careful not to pass a value judgment on the changes; that is, they don’t rank one state of consciousness “higher” or “lower” than the other — those interpretations are up to the user. They also make it a point to note that analyzing neural signal diversity is an “imperfect approach,” pointing out that because “each participant has their own yardstick for evaluating the strength of an experience,” associating their trip’s intensity with what’s going on with their brain will inevitably be inexact.

In an interview with Medical Express, the team said they were “cautiously excited”, but in their paper they acknowledged that more work, looking specifically at the different aspects of the psychedelic state, will be necessary to “more tightly tie neurophysiological measures such as those we have used here to subjective experiences.”

Until those studies take place, it might be helpful to keep this point in mind: Even if you don’t have concrete proof that you’ve reached a different state of consciousness, that doesn’t disqualify the fact that you feel like you have. Whether that state is “higher” or “lower,” however, is totally up to you.