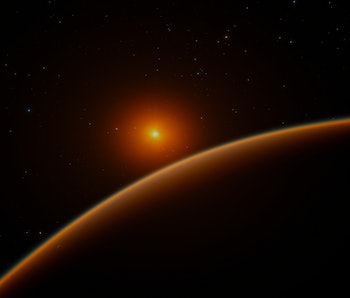 The list of planets that could be home to alien lifeforms just keeps getting longer and more exciting. A new study published in Nature on Wednesday reports on a “super-Earth” exoplanet found 40 light-years away, orbiting a faint red dwarf star called LHS 1140. It’s not only located within the star’s habitable zone — it’s also suspected to have still retained its atmosphere, making it perhaps the most promising place in the galaxy to look for alien life.

Hearing the phrase “habitable exoplanet” inevitably conjures up visions of another planet like Earth, teeming with vast oceans, swaths of green lands, and a crisp, gaseous veneer that keeps the whole thing together. Unfortunately, when scientists refer to new discoveries like Proxima b and the seven-planet TRAPPIST-1 system as “potentially habitable,” they’re just referring to the bare-bones standards for that label. In short, it means that a rocky planet is orbiting its star at a distance in which liquid surface water might exist. It’s not too hot and not too cold, it’s just right — hence the term Goldilocks zone.

Thus, the prospect of an exoplanet with a sustained atmosphere is extremely exciting, especially for alien hunters and for those on the search for Earth 2.0. Being in a good orbital distance means nothing unless the water has an atmosphere that can trap it down and actually keep the planet temperate enough for surface water to thrive.

The planet, LHS 1140b, was initially found using the MEarth facility run by Harvard University astronomers, which had previously helped discover the potentially-habitable GJ 1132 b exoplanet as well. Further observations made using the European Southern Observatory’s High Accuracy Radial velocity Planet Searcher, or HARPS instrument, confirmed the presence of an object about 40 percent larger than the Earth — qualifying it as a super-Earth.

Found in the constellation Cetus, LHS 1140b receives only about half as much sunlight as Earth does from its host star — but it’s about 10 times closer to the M dwarf LHS 1140 than Earth is to the sun. The research team suspects the planet is about five billion years old, with a mass about seven times greater than Earth’s — which strongly suggests the exoplanet is rocky within a dense iron core.

While LHS 1140b’s life in the habitable zone is pretty encouraging already, it’s the hope for an atmosphere that really gets us excited — that raises the specter of liquid water much higher. But what exactly do we know about LHS 1140b that suggests it has an atmosphere?

Here’s the thing — if LHS 1140b is habitable now, it certainly wouldn’t have been in the past. A younger LHS 1140 host star would have washed the exoplanet in hellish waves of ultraviolet light that would have turned the planet into a deathscape like Venus.

But remember — this is a super-Earth! LHS 1140b’s larger size may mean it once possessed a surface ocean of magma millions of years ago. “We think that LHS 1140b could have sheltered its water and other gases that might be prone to escape in its magma while the star was contracting down to its final size, and its habitable zone, subsequently, moving inwards,” Harvard astronomer Jason Dittmann, lead author of the study, tells Inverse. “Once the star had calmed down a bit, the magma would cool and start to release its water and other gases, forming the planet’s atmosphere.

“Right now we don’t have measurements of LHS 1140b’s atmosphere or the atmosphere on other M dwarf rocky planets, and so a lot of this work is based upon theory and calculations,” says Dittmann. “But hopefully someday very soon we can start confronting those theories with real data!”

The fact that LHS 1140b is a super-Earth is a bit concerning to any hopes that — if humans ever manage to master interstellar travel — we could one day settle the planet and establish a colony. But this doesn’t exactly deter hopes for finding some form of alien life. “Perhaps there’s a limit for what life can handle when the gravity gets too high,” says Dittmann. “But we know that things can live at very high pressures at the bottom of the ocean, and we know of lots of bacteria that can survive all sorts of crazy environments, so I think it’s not infeasible to imagine some form of life being ok with living on a super-Earth.”

The new study also does more to bolster the prospects of finding habitable planets around red dwarf stars — an insurgent trend among the astronomy community these days. Red dwarfs comprise about 80 to 90 percent of the stars in our own neighborhood within the Milky Way, and those systems could prove to help encourage the evolution of the most common form of alien life in the universe. Moreover, they are easier to study: “Red dwarfs are good candidates because it is easier to detect planets orbiting the habitable zone of the host star,” Nicola Astudillo-Defru, an astronomer from Geneva Observatory in Switzerland and a co-author of the study, tells Inverse.

Ultimately, everything is going to depend on what the follow-up studies will be able to tell us about LHS 1140b — particularly in the hunt for biosignatures that could be proof of the existence of life on the planet. “There are lots of things that people consider to be important “biosignatures”, and this is a hot topic of research and debate about what we would consider unambiguously due to life,” says Dittmann. “But our immediate plans are to ‘throw every telescope we have it’, and in particular this means using the James Webb Space Telescope when it launches [in 2018] to look for signs of ozone, carbon dioxide, and methane. Also, because [LHS 1140] is bright enough at optical wavelengths, we hope to use the Giant Magellan Telescope and European Extremely Large Telescope — 30-meter optical telescopes currently being built — to look for signs of molecular oxygen as well.”