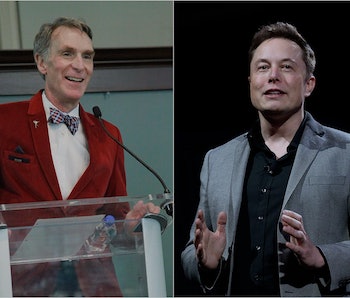 As you may expect, Nye is a big fan. “He and [his] companies are shaking things up in a great way,” he responded. And the two geek tycoons have met before, too. Here’s Nye’s full response:

He and is [sic] companies are shaking things up in a great way. Some disclosure, he served on the Board of The Planetary Society for a while, but has had to recuse himself as SpaceX became Yuge. (I gave him a ride to the airport once.) The Tesla outperforms conventional gas-powered cars (as does my new all-electric Chevy Bolt). If the reused lower stage of the Falcon rockets proves profitable, it will change space exploration in great way. Go Elon! (He’s an immigrant to the U.S., bt-dubs.)

Nye is right: the Falcon 9’s reusability will be key to SpaceX’s success. The rocket costs $62 million, but fuel only costs around $200,000. If Musk can re-use the rockets, the company will be able to save millions and fund more ambitious flights. Eventually, reusable rockets could enable the colonization of Mars.

The Planetary Society also plays a big role in the promotion of space exploration, and Nye is the foundation’s current CEO. Founded in 1980, Carl Sagan and Neil deGrasse Tyson are just two of the people that have played a key role in its development, and it counts 40,000 people in its membership. It’s easy to see why Musk would take an interest in the group.

Bill Nye Saves the World’s first 13-episode series is set to launch on Friday, April 21, the day before Earth Day, and covers science’s relationship with politics, pop culture, and the wider world.

Nye is also serving as honorary co-chair of Saturday’s March for Science, taking place in 500 cities across the United States. Scientists have criticized the march for politicizing science, something Nye argues misses the point of science’s relationship with politics.

Watch the trailer for Bill Nye Saves the World below: