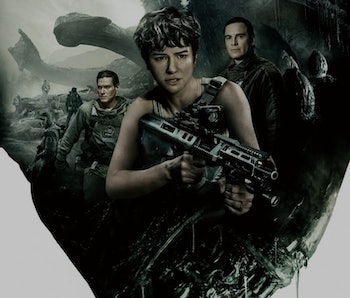 The last time one of the Engineers’ ships was seen was when Dr. Elizabeth Shaw and David’s head were leaving the surface of the moon LV-223 at the end of Prometheus. But now, the newly revealed international poster for Ridley Scott’s upcoming Alien: Covenant, the sequel to Prometheus, features another — or maybe the same — Engineer ship, commonly referred to as a “Space Jockey” ship among Alien franchise fans.

You know the Space Jockey: the pilot of the spacecraft from the original Alien who crashed on planet LV-426. The crew of the USCSS Nostromo came across the Engineer’s ship in the original film, and a recent trailer for the upcoming Covenant contained a flashing image of another — or, again, maybe the same — Engineer ship.

The uncharted paradise Katherine Waterston’s Daniels and her crew will come across in Alien: Covenant is confirmed as having at least one of the Engineers’ ships on-planet, but the question remains as to which one it is. Is this the ship that Shaw and David’s head piloted off LV-223 10 years ago at the end of Prometheus? Is it the one on LV-426, or are they all the same ship? Or is it one of many?

Find out more about the Jockey ship when Alien: Covenant premieres in theaters May 19.