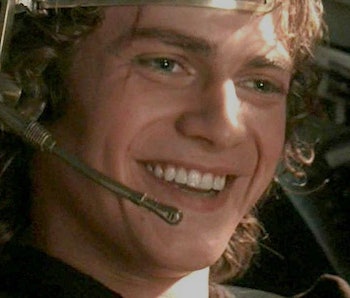 Everyone knows that Anakin Skywalker can’t stand sand, but his perfectly valid opinion on the subject caused a lot of problems among Star Wars fans back in the day. Hayden Christensen, the actor behind Anakin in both Attack of the Clones and Revenge of the Sith, returned to Star Wars Celebration for the first time in 15 years on April 13. And it turns out he’s still the classiest, sweetest Star Wars actor of them all.

Christensen was the subject of a lot of vitriol from Star Wars fans when the prequel trilogy was first released. Christensen was cast alongside Ewan McGregor’s young Obi-Wan Kenobi as the prophesied Chosen One, the individual who would bring balance to the Force. But Christensen’s casting did anything but bring balance — it actually brought a lot of contention.

The last Star Wars Celebration that Christensen attended in-person was the 2002 convention centered around the then-impending release of Attack of the Clones.

That was 15 years ago, and Christensen has pretty firmly avoided Celebration since then, though this year he attests that Star Wars is still very much a part of his life.

Proving himself the classiest, best-natured Star Wars actor of them all, Christensen smiled and waved through this year’s Celebration and answered the burning question still on everyone’s mind: “What are your thoughts on sand?”

Christensen smiled and took the well-intentioned jest with grace. “Well, it’s not very smooth,” he said, getting cheers from the gathered audience. “It doesn’t really stay in one place. So, I’m not such a big fan of it myself. Although, if it leads to the water, I can tolerate it. But Anakin came from a desert planet, so I understood his contempt for it.”

The sand question is, of course, a reference to one of Christensen’s lines as Anakin in 2002’s Attack of the Clones, when Anakin tells Natalie Portman’s Padmé Amidala: “I don’t like sand. It’s course and rough and irritating, and it gets everywhere.”

The line is often met with a cringe from Star Wars fans — as it’s yet another example of Star Wars creator George Lucas’s ineptitude at writing convincing dialogue — and has undoubtedly plagued Christensen since the day he uttered it on set and ran an awkward hand up Portman’s bare shoulder. It’s right up there with “I’m haunted by the kiss that you should never have given me,” and “if Master Obi-Wan caught me doing this he’d be very grumpy.” It’s like Lucas was intentionally setting the then-19-year-old Christensen up for failure from the beginning.

But now, in 2017, young Star Wars fans who grew up with love for Christensen’s sand-hating Anakin are adults, and they seem more than happy to accept him back into the fold. Or, y’know, the Force.

Here’s everything else you might have missed at the 2017 Star Wars Celebration.