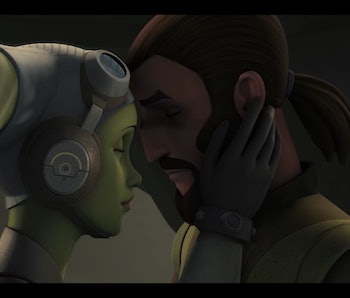 On the third day of Star Wars Celebration in Orlando, fans got their first look at Season 4 of Star Wars Rebels. Set to be the final season of the series, Season 4 promises to bring with it some unexpected twists. The new teaser trailer telegraphs this with Hera Syndulla offering an ominous taste of things to come.

“We fought for each other. We fought for those who could not,” says the captain of the Ghost in a voiceover. “But we never imagined it would end like this.”

Season 3 ended with Ezra experiencing some serious growth, Hera cementing her position as a capable leader, Sabine appearing to return to her people, and Kanan coming to terms with the loss of his vision — which the show runners say will continue into Season 4.

At the Rebels panel during Star Wars Celebration, Freddie Prinze Jr., who voices Kanan on the show, offered a vague glimpse of what’s to come for his character and, by extension, the rest of our heroes.

It’s still unclear how close Season 4 come will come to Rogue One continuity, or whether, as Prinze Jr. suggests, the Rebels will meet a fate similar to the protagonists in Rogue One, but the new teaser trailer features plenty of flying Mandalorian ass-kicking, outer space and sub-orbital dogfights, and even Hera taking a ship into light speed right through an Imperial space station.