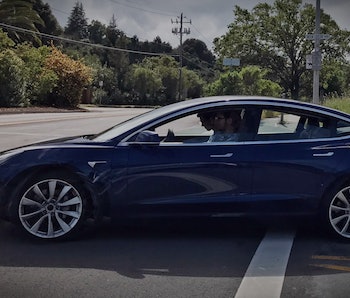 Tesla has been putting its upcoming Model 3 electric vehicle through its paces, and the public is taking note. On Wednesday, one forum poster uploaded two photos of a blue Model 3 out on the road near the company’s headquarters, with the car following a testing route where many other fans have spotted pre-release models.

A user by the name of gr33n shared two photos on the Tesla Motors Club website of the Model 3 going for a spin. The $35,000 vehicle, Tesla’s cheapest car, is set to enter production this July, with the first deliveries taking place soon after.

Tesla is making a number of moves to bring costs down. The Gigafactory, located in the Nevada desert, will help bring battery prices down by producing cells at an incredible rate. The factory will inhabit five million square feet of land when complete, and the company is aiming to use the facilities to help produce 250,000 Model 3 vehicles per year by the end of 2018. The car’s launch will be a big moment for the company, as it moves away from low-quantity premium offerings and toward a mass market.

Until recently, a Model 3 sighting was a rarity. But ever since Elon Musk posted the first video of a Tesla Model 3 release candidate in action late last month, footage has been coming through thick and fast. A Model 3 with an extra pair of sensors was spotted in one set of photos, then two videos surfaced of the car in action.

It seems Tesla is sticking to familiar testing grounds. A street sign in one of the photos reads “Deer Creek Road,” where the company’s headquarters are located. Google Street View shows the photo was taken where the road meets Arastradero Road:

Arastradero Road has played host to a number of prototype sightings: in September 2015, fans spotted a pre-release Tesla Model X driving along the route, and last Wednesday a black Model 3 was spotted on the same road.

The company will need to wow consumers if it wants to reach high sales figures. New research released this week showed that tax credits have a larger effect on sales figures at the lower end of the market than they do at the higher end. When Georgia removed electric vehicle credits, the Tesla Model S maintained sales while the Nissan Leaf suffered. Tesla needs to ensure the Model 3 is as bug-free as possible to make a good first impression when it hits the road.