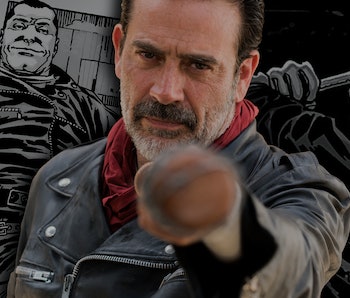 In the final scenes of Season 7’s finale, AMC’s The Walking Dead caught up to Vol. 20 of Kirkman’s comics. That means Walking Dead has been following the “March to War” storyline, and when Negan proclaimed “we’re going to war” in the Season 7 finale, the show entered Kirkman’s “All Out War” arc. So what does this mean for a tired, struggling show?

After Season 7 ended in April, The Walking Dead showrunner Scott M. Gimple said the show would not likely overtake and pass the story told in Robert Kirkman’s comics. Kirkman confirmed this with The Hollywood Reporter, saying, “If the show is gaining on the comic book, it’s at a very slow pace.”

From here on out, Kirkman’s comics focus more intently on the themes that are dragging down AMC’s drama: struggles with Negan, human on human crime, and trade negotiations between survivor groups. If The Walking Dead doesn’t part ways from the comics soon, as Game of Thrones intelligently did in Season 6, it won’t survive another season. What was once a riveting drama about a handful of survivors in a zombie apocalypse has now become something more aptly titled “40 Depressed Strangers Talk About Guns While Standing in the Woods.”

Here’s a recap of what happens in Kirkman’s comics during “All Out War” Parts 1 and 2, and beyond: Alexandria, the Hilltop, and the Kingdom all attack Negan and the Saviors. Rick slashes Negan’s throat and takes him prisoner. After the “All Out War” arcs, two years pass and “A New Beginning” starts with issue #127, in which Carl leaves Alexandria for Hilltop. Later, a new group of humans disguise themselves as walkers and begin attacking our heroes. Those fake walkers, who call themselves the Whisperers, are still the primary threat to Rick and the gang in issue #166, which hit stores April 5.

Essentially, if AMC’s The Walking Dead continues following its comic book source religiously, Season 8 will see Negan taken prisoner, and the series will introduce the Whisperers, who frankly aren’t interesting enough to carry the show, let alone save it from ratings hell. Certain things, like psychological warfare and quiet scenes set in bunkers, work better in comic books than they do on the formerly action-packed TV series.