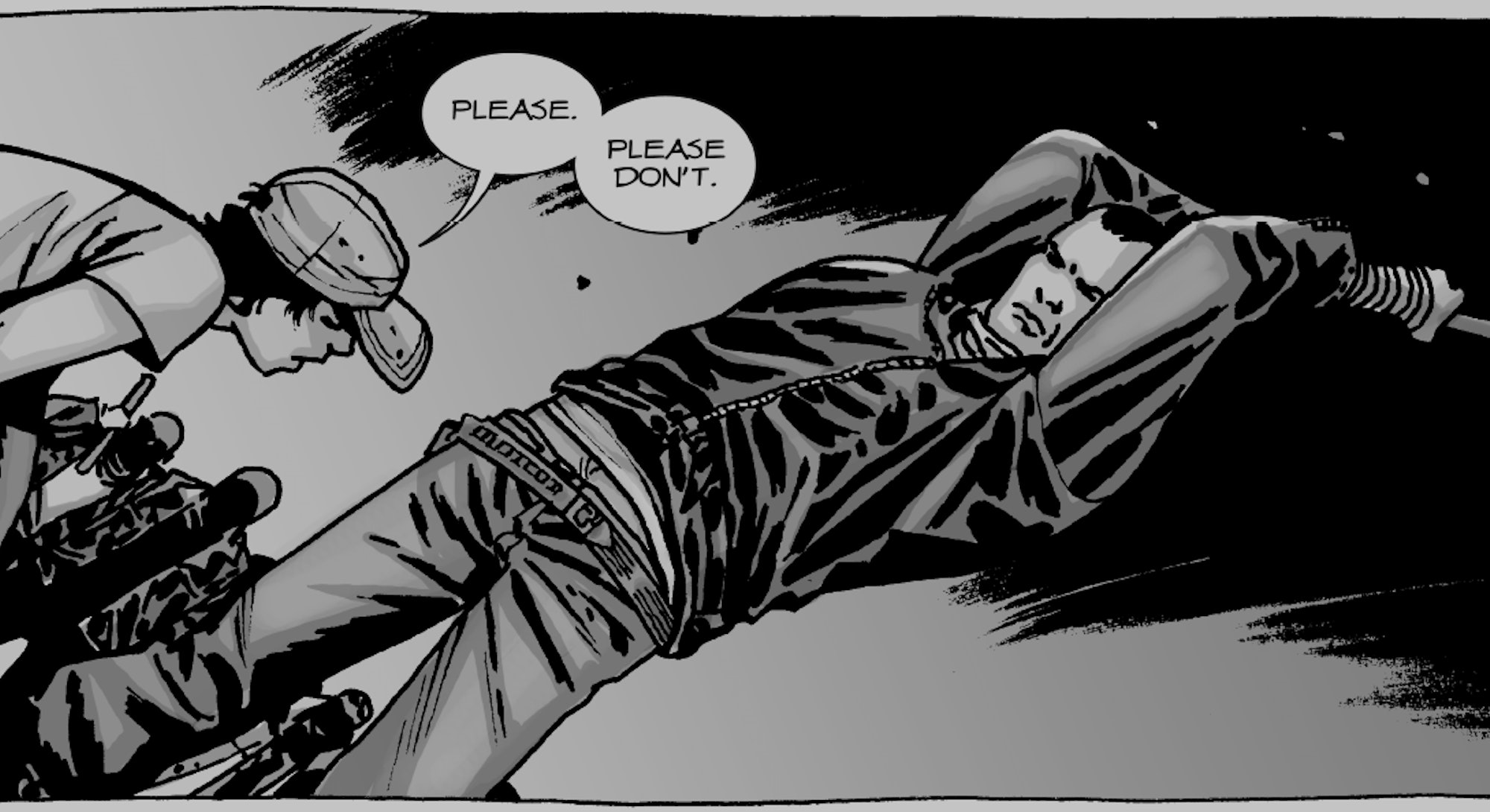 For better or worse, Negan finally debuted on Walking Dead in last night’s finale. Much of his dialogue matched his lines from the first comic issue in which he appears, The Walking Dead, issue 100, but a few choice threats made in that book — including the one where he tells Rick he hopes to “slide his dick down his throat” — were cut from the broadcast.

Much has been said already about Negan’s profanity, and his phallic obsession with his barbed-wire-bound baseball bat, Lucille. Negan vs Rick is just a violent dick-size contest, and in the comics, Glenn gets his skull crushed to pieces because Rick just doesn’t measure up.

In order to truly pinpoint Negan’s influence, on both the comic series and the television show, we have to take a look at The Walking Dead’s ever-present anxious masculinity. Negan isn’t frightening because he kills characters — that much we’re all used to, since it’s a show about the zombie apocalypse. Negan is disturbing because he’s a nightmare to straight, powerful men. His presence in The Walking Dead is especially potent and shocking because the entire franchise is a masculine survival fantasy. Let’s discuss.

Last night’s Walking Dead frustrated comic book fans in more ways than one. Most prominently, the episode ended without a real conclusion: we won’t know who Negan beat to death with Lucille until the show returns for a seventh season.

The Walking Dead has been for several years the most watched series on television, in part because it presents a cathartic narrative to viewers across demographics. All of us want to believe that we would, individually, survive a societal and economic collapse, and The Walking Dead allows us to play out that fantasy.

Who are you, the show asks, without your iPhone and your paychecks, your boozy brunches and favorite laundromat? Are you a father? Are you attractive to women, once your masculinity has been stripped of its contemporary aesthetics, made pure by necessity? Are you a survivor and a fighter like Rick, The Walking Dead’s central protagonist, or are you a scrappy beta male like Glenn, whose wit and resourcefulness found him a love interest in both the comic series and television show?

Although the show has done some work in femininity, particularly shaping both Michonne and Carol, both characters are made more powerful by appealing to, and becoming useful to, their male counterparts. On the show, Michonne acts as muscle, much like Daryl; and Carol uses her feminine, elderly appearance to carry out espionage for Rick. Truly feminine characters, like Andrea and Beth, don’t last long in The Walking Dead’s world.

Negan, as he appears in the comics, is an alpha male’s worst nightmare: he renders Rick helpless, catching him unaware and stripping him of the things that give him agency, all while being shorter and stockier than Rick. Negan makes sexual jokes about other men, and he manages to insult Carl, Rick’s son, in a way that nails one of Rick’s deepest fears: that raising Carl in a post-apocalyptic world has taken any empathy or adolescence from him. Negan takes Rick’s weapons and his ability to protect those Rick believes are dependent on him.

On the other hand, Negan as he appeared on television, was played by a tall, classically handsome Jeffrey Dean Morgan, a man who appears like a logical antagonist for grizzled Rick (Andrew Lincoln). If you’re not a comic book reader, the following scenario might communicate Issue 100’s horror: Imagine a home invasion scenario, in which a stout little dude who looks like a clean-shaved Paul Giamatti kicks the shit out of your dad, tells him he’s going to rape him, and then beats your older brother to death with a baseball bat.

Negan is the polar opposite of Rick in many important ways. He’s lewd where Rick is stoic, and he gleefully enjoys the violent wasteland Rick abhors. In a strange way, both men flourished post-apocalypse, and when they meet in The Walking Dead, issue 100, it’s clear that both can’t exist at the same time.

By the time the comics introduced Negan, Rick’s story had been definitively moral and measured. The central question in most pre-Negan issues was whether Rick and his gang were doing the best thing, the most logical thing, and they hoped to maintain their humanity while satisfying their animal urges. The Walking Dead’s heroes are marked by their shared quest for something more, a motivation to transcend the cruel world they inhabit and find safety, respite and connection. While early villains, like The Governor, oppose Rick’s objectives, they still play by Rick’s rules.

Rick and The Governor, as similarly straight-forward, masculine archetypes, understand each other. Negan arrives to the scene with a series of uncomfortable panels. He has an adolescent’s sense of humor, and a teen boy’s petulant voice. He’s the kind of punk Rick should be able to take out, the kind of boy a dad would never let his daughter go on a date with, and yet he humiliates and pulverizes the comic’s heroes so swiftly that the reader’s guts hit the floor. Negan is terrifying to a very particular group of readers: those who accept and adore The Walking Dead’s code of conduct: that honorable men will be rewarded for their courage and sacrifice, and that honesty and conservative ideals of family will win out in the end.

If Rick is Ronald Reagan, representing nuclear family values and classic fatherhood, Negan is Robert Mapplethorpe and his graphic photos being featured in the National Endowment for the Arts collection, shortly after Reagan attempted to defund the program. Before Negan appears in the comics, Rick has had his life, but not his worldview, threatened. Negan hopes to demolish both.

Many Walking Dead fans have begun to rely on Rick’s authority as paternal. Though many of us are frustrated with his black-and-white, rigid worldview, we do want him to win out in the end, and we believe he can protect and avenge weaker characters. On top of the above scenario’s awful violence, there’s something raw and wrong with the image: at our core, we all want to believe power imbalances will fix themselves in the end. A villain who is a punk, a cretin, or a psychopath with a short-man complex and an annoying voice should get his head knocked in. That’s the way we tell horror stories; subconsciously, we see off-kilter performances of masculinity as worthy of punishment. In other post-apocalyptic media, like The Road or Ash v Evil Dead, evil is signified by an inhuman, or otherwise unfamiliar, behavior pattern. Negan acts out that uncomfortable persona for The Walking Dead’s viewers, and then he wins anyway.

Rick, the group’s alpha male, has to watch Glenn, a likable but undeniable beta-male, cry for his wife while trying to put his own eyeball back into his skull. There’s a heart-wrenching in the comics when the gang turns to Rick, after Negan has laid out his plan in the most annoying way possible — with phrases like “pee pee pants city” — and Rick can’t even look the others in the eye. That’s why Negan matters; because his introduction to the television show will break Rick in a way viewers haven’t experienced before. Rick, and fans of The Walking Dead, have become accustomed to death threats. What the audience may not be prepared for is watching their main man’s power, and masculinity, interrogated.