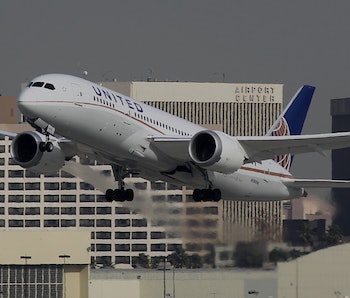 United Airlines, already reviled for its less-than-stellar record of customer treatment made news again after a passenger was dragged off a plane when he refused to give up his seat on an overbooked flight.

The video of the event has gone viral and has resulted in monumental outrage directed at United Airlines, which just moments before the incident had been asking passengers to “voluntarily” give up their seats to make room for some United employees. The incident has caused many to wonder — rightly — why companies like United purposely overbook flights in the first place. It’s a practice that has caused, at best, some inconvenience for many over the years.

Until 1978, there existed a federal agency called the Civil Aeronautics Board (CAB) to regulate the air industry. At the time, the government classed airline travel as a “public convenience and necessity,” much the same as many other forms of transportation in America. The CAB’s job was to enforce that designation.

Equally-sized cities were entitled to relatively equal service from airline companies, and the CAB’s regulations protected smaller cities and regions from falling out of the air travel grid entirely. But the CAB was done away with during Jimmy Carter’s administration. The move came ostensibly to reduce airfare through increased competition, but in the long run, it enabled airlines to run wild with faster growing prices and other changes to their services.

When Airplane Overbooking Began: After 1978 Deregulation

Brett Snyder of crankyflier.com tells Inverse that overbooking “probably started after the industry was deregulated in 1978.”

On the surface, it’s not hard to understand why airlines engage in overbooking. On a large flight with over 100 passengers, it’s pretty likely that not all of them are going to show up. If they don’t show up because they’re running late, the airline will likely accommodate them on another flight. That could wind up costing the airline money, more than they made from the late person’s ticket. Overbooking ensures they make the most money possible from a flight, even if people don’t show up. Besides, why not overbook if they can? It isn’t illegal, thanks to the disassembly of the CAB. More people paying means more money coming rolling in.

This is why you often have airline gate employees offering gift cards or free travel to people willing to take a later flight than the one they booked. The flight has been oversold.

But airlines also don’t want to track too far in another direction. You can’t have flights way overbooked and passengers repeatedly stranded if you want to retain any customers. It therefore became a balancing act for airlines. Snyder says that, “airlines routinely overbook and have sophisticated revenue management systems that help them determine the optimal number of seats to sell for each flight. There are teams that manage this process within each airline.” Airlines have even been known to employ algorithms to that effect.

But is that any help to consumers?

A spokesperson for Airlines for America, an airline industry trade group, had this to say in a statement given to Inverse:

Less so when you consider the whole picture. In 2016 the Bureau of Transportation Statistics reported that roughly 719 million people flew on commercial flights. For that number, .62 people out of every 10,000 comes out to be about 44,500 people. That’s about 122 people per day who fall victim to overbooking.

For the 69-year-old man involved in the United Airlines flight 3411 incident — who fell and was injured in the violent, public altercation — the statistics are little solace.

The terrible situation on United flight 3411 begs another question, though: Did United not make an offer good enough for someone to take a later flight ?

Those passenger entitlements are important to know for anyone who is planning to fly, even though it’s starting to seem like it might be better just to bring back the CAB wholesale. It would save frequent fliers a lot of headaches.