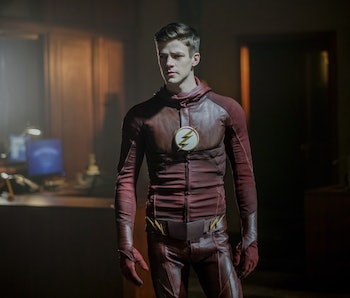 Rebellions may be built on hope, but so is the fight against Savitar. A new synopsis for the upcoming next episode of The Flash reveals that Barry Allen will have to use the power of hope and optimism in order to win the day. It’s less corny than it sounds when you consider how much the Central City speedster has represented hope for the DC Universe.

In “The Once and Future Flash,” which will air on April 25 after the show’s month-long hiatus, Barry Allen jumps to the year 2024, the same year Iris West’s article about Flash’s disappearance gets published, only now it has a new byline. The synopsis for the episode mentions Barry will have to inspire hope in his old team, all of whom have been dramatically changed after Iris’s death. Some of those changes include a paralyzed Wally West (Keiynan Lonsdale), a depressed Barry, and an abandoned S.T.A.R. Labs.

“The Once and Future Flash” synopsis is below:

Barry (Grant Gustin) travels to the future to find out Savitar’s still unknown identity in the hopes of saving Iris (Candice Patton). Upon his arrival in 2024, Barry encounters future versions of his Team Flash friends, who, following the death of Iris, have become very different people, profoundly impacted by their showdown with Savitar. It will be up to Barry to infuse a sense of hope back into the team, as he proves to be hero his future friends have been waiting for. Meanwhile, back in 2017, the hunt for Killer Frost (Danielle Panabaker) continues. Tom Cavanagh directed the episode written by Carina Adly MacKenzie.

The Flash has always been a beacon of hope all throughout DC’s universes. In the recent DC Rebirth event that took place last summer, DC head honcho Geoff Johns said the Flash was the perfect avatar to bring positivity back into DC’s comics. “He embodies hope, family, heart, and he’s been missing,” Johns told Inverse last summer. “I would give these books to, I mean, anyone. If anything, I want a kid who reads a new comic from us to be inspired.”

The Flash will return on April 25 on the CW.