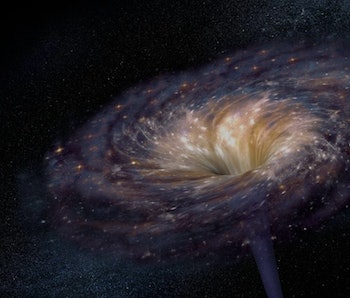 Most galaxies contain a supermassive black hole at the center. There’s a lot we don’t know them, even our own in the Milky Way, Sagittarius A*). But now over a decade’s worth of development has readied a telescope that scientists will use to solve some of the biggest mysteries about black holes. On April 5, astronomers will start imaging Sagittarius A* to process the first picture of a black hole ever.

You might be thinking, “Wait a second, isn’t it impossible to see a black hole?” That’s sort of true. Black holes consume light, but we can capture images of the light photons being sucked into the hole at a point that’s called the “event horizon.” So instead of looking at the black hole itself, we’ll basically be looking at its outline.

Sagittarius A* is 26,000 light years away. No single telescope on Earth is powerful enough to image it, so scientists came up with a brilliant idea: They’ll use six telescopes around the world in tandem to act as one gigantic “Event Horizon Telescope” (EHT).

EHT goes into action this week. It will capture images for a period of ten days between April 5 and April 14, after which the images will be processed and released to the public sometime in 2018. The data from each telescope will be so large that scientists will fly them to MIT Haystack Observatory rather than send them over the internet. The latter would actually take longer.

The data gathered from this project could revolutionize the study of black holes and even of physics in general.

Albert Einstein’s theory of general relativity has been proven on a small scale. Gravity on Earth is relatively weak, whereas the gravitational forces around black holes are extreme. Professor Gopal Narayanan of UMass Amherst, one of the researchers behind the project, explained in a press statement, “In all of physics, extreme limits are the most interesting. At these limits, you really figure out where things are breaking down, and it’s where new discoveries are made.”

This data will help us test Einstein’s idea that quantum mechanics and general relativity have fundamental concepts in common and his theory that a shadowy circle exists around black holes and puts constraints on their mass and spin. The data could also shed light on Stephen Hawking’s theory that the matter consumed by black holes somehow leaks back into the known universe.

We’ve seen images of stars orbiting black holes before, but we’ve never seen an event horizon. It’s hard to overstate the significance of these forthcoming photographs, as they could completely change our understanding of basic concepts in physics. Too bad we need to wait until 2018 to get the results.