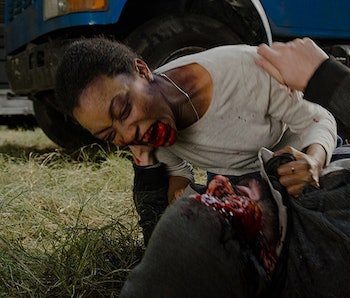 Season 7 of AMC’s The Walking Dead, aka The Negan Show, concluded this week with an action-packed premiere. In order to celebrate an unpopular but pretty eventful season wrapping, we’ve ranked the top 5 most shocking moments from the last season, starting with Glenn and his bloody date with Lucille.

Though most Walking Dead fans knew Glenn was Negan’s big kill in Robert Kirkman’s comics, Jeffrey Dean Morgan’s villain took a swing at Abraham first. It seemed, for a moment, that Maggie’s husband Glenn had avoided his comic book fate, but Daryl spoke up with an attitude, and Negan cracked Glenn’s skull too.

Fans hadn’t seen humans manipulate walkers with much creativity since Michonne first appeared with her mutilated corpses. Season 7’s coolest fight scene pitted a flabbergasted Rick against an armored walker, and the stakes felt higher than ever.

Morgan has been the show’s constant moral center for several seasons, but the cruelty enacted by the Saviors and surrounding tribes finally pushed him into violence. When Benjamin was killed in Season 7, Morgan erupted into a rage and strangled Richard to death in front of an entire crowd.

In that moment, The Walking Dead became a show about ruthless survivalists rather than people of various alignments attempting to compromise. Morgan was the last true pacifist to break under pressure.

Sasha Kills Herself to Save Alexandria

The Season 7 finale solved a problem introduced in Kirkman’s comics by letting Sasha define the terms of her inevitable death. When Negan put her in a coffin to present her to Rick and Alexandria as blackmail, she listened to Eugene’s iPod, took her suicide pill, and hallucinated a long conversation with Abraham before dying and zombifying during the trip. When Negan opened the coffin, expecting her to beg for her life, a zombie Sasha leaped out and went for the jugular. Although it was sad to see her death confirmed, she kickstarted the war that will follow The Walking Dead into Season 8.

Dwight Is a Double, No, Triple Agent

Fans of the comic weren’t surprised when Dwight betrayed Negan and told the Alexandria gang that he wanted to kill the Saviors’ leader. They were surprised, however, when Dwight showed up to Alexandria at Negan’s side. The final moments of the episode confirmed Dwight’s real alignment, setting the stage for a conflict that will definitely piss Negan off.

The Walking Dead returns for Season 8 this October.