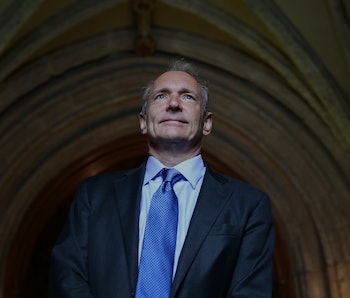 Computer scientist Tim Berners-Lee just took home a $1 million computing award widely compared to the Nobel Prize. The Association for Computing Machinery announced Tuesday that the MIT professor was selected for the ACM A.M. Turing Award to recognize his invention of the World Wide Web, which seems fair.

In 1989, Berners-Lee — known alternately by his full name, Sir Timothy John Berners-Lee, and his nickname, TimBL, one of which is clearly more fun — was a programmer at the European Organization for Nuclear Research (CERN). After conceiving the idea out of frustration that so many multimedia files could be uploaded to CERN’s computers and yet not be interconnected, he began work on the first web browser, and the frameworks that would ultimately allow the information on the internet to scale up to how we use it today.

“Now we have to talk about [the web] as a human right,” he told the MIT Technology Review. “It’s not as basic as water, but the difference in economic and social power between someone who has it and someone who doesn’t means they’re massively disadvantaged. If you’re in a village in Africa and you don’t have access because you can’t afford it, or you do have access and you can’t use it because you’re not literate, then this is a problem.”

The Turing Award was named in honor of British mathematician Alan Turing, known for his incomparable work inventing the first computer during WWII, documented in the mildly entertaining film The Imitation Game, in which he was portrayed by Sherlock-star and otter lookalike Benedict Cumberbatch. The award has recognized the world’s highest achievements in computer science annually since 1966, making Berners-Lee the recipient for its 50th anniversary (technically he won for 2016; the award is presented each following spring). The $1,000,000 purse itself comes from Google.

Berners-Lee is a career advocate for open-source data and online privacy, a concept that feels more urgent since the proliferation of social networking. These days, he’s a principal investigator at the Computer Science and Artificial Intelligence Laboratory at MIT, to which you can presumably address your thanks and hate mail. He’s currently working on Solid, a new project he says will move us toward a future where everyone can control their own data autonomously. MIT describes it as something that will “radically change the way Web applications work today, resulting in true data ownership as well as improved privacy.”