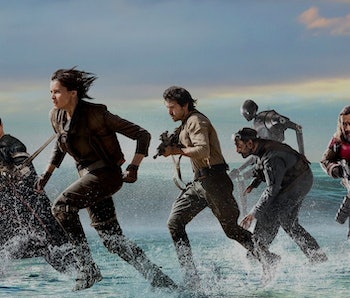 It’s no mystery that Rogue One: A Star Wars Story was a heartbreaking lead-up to the original Star Wars: A New Hope story. But fans, after months of waiting since the film’s December 2016 premiere, will finally be able to purchase Rogue One on DVD and Blu-ray on April 4, as well as an Imperial army’s worth of extras and special features.

Fret not: If you can’t get to a store that’s selling Rogue One anytime soon, then you’ll still be able to watch most of the special features: Only a few of them aren’t included in the Digital HD version. The digital version is currently available for download across multiple platforms, such as Google Play, iTunes, Vudu, and more.

But because there are so many features to take in and so much new information provided about the Star Wars galaxy in these features, we thought we’d outline some of the coolest ones. Here are five of the best special features on the Rogue One: A Star Wars Story Blu-ray:

“Visions of Hope” reveals that Rogue One’s iconic look was actually created long before the actual storyline. “When the writer came on board, and the director came on board, we had a head start,” Lucasfilm Executive Creative Director Doug Chiang says in the featurette.

So, Rogue One director Gareth Edwards is a giant Star Wars nerd. In fact, he actually visited the IRL set of Tatooine (which is in Tunisia) in 2005, over a decade before the release of Rogue One. The head of Lucasfilm, Kathleen Kennedy, was actually taken aback by Edwards’s fervor upon meeting him, but, obviously, Edwards’s skill as a storyteller won out in the end.

This is the featurette about the film’s easter eggs. The coolest one by far has to do with a secret word being carved in Aurebesh (the language of Star Wars) on Jyn’s kyber crystal necklace given to her by her mother at the beginning of Rogue One, the very same one that drew Chirrut to her later on.

2. Target exclusive: “Inside the Creature Shop” with Neal Scanlan

As it says on the Target website: “Discover what it takes to bring Rogue One’s innovative aliens to life, with Neal Scanlan, Creative Supervisor of Creature & Droid FX.” Maybe this feature, an exclusive to the Blu-ray version from Target, will finally explain what’s up with Admiral Raddus and the screaming, gun-toting monkey rebel.

The reveal of Princess Leia in Rogue One had audiences gasping and cheering across the world. But it turns out bringing a young Carrie Fisher back to the big screen was no simple feat. In fact, the team spent sleepless nights remaking Fisher’s iconic 1977 A New Hope look atop actor Ingvild Deila’s face to get it just right.

As of April 4, Rogue One: A Star Wars Story is available on Digital HD, Blu-ray, DVD, and On-Demand.