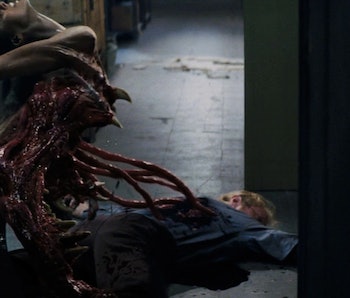 2011’s remake of John Carpenter’s The Thing is one of the most tragic fuck-up stories in modern horror filmmaking. Though film SFX collective studioADI produced hundreds of disturbing practical effects rigs and puppets for the new film, their entire workload was scrapped in a terrible, terrible last minute decision. All of their visuals were replaced in the film with flat-looking CGI, the film bombed both critically and at the box-office for overlooking what made Carpenter’s original a masterpiece, and the rest is horror history.

This week, studioADI uploaded never-before-seen footage of their original horror sculptures, and it’s heart-wrenching to watch the systems behind what could have been a modern SFX classic. The split-skull rubber masks toward the end of the video are incredible, and the real pyrotechnics at the end of the clip are almost heart-breaking to watch, especially if you recall how silly the CGI flames looked in the final film.

Devastated by the film’s laziness, Time Out said, “the predictably dull CGI underlines how far movie magic has regressed in the past couple of decades,” and most critics tended to agree. Watch the full backstage video of the film’s original, practical effects below, and judge for yourself which process would have made a better film.

More like this
Entertainment
5.10.2022 11:15 AM
5 years ago, Happy Death Day did one revolutionary thing no time-travel movie had done before
By Will Ashton
Entertainment
5.9.2022 4:00 PM
Alex Garland’s surreal thriller 'Men' is maddening in the best way possible
By Jenni Miller
Entertainment
5.13.2022 1:30 PM
Christina Ricci says Yellowjackets fans will love her monstrous new thriller
By Dais Johnston
Share: