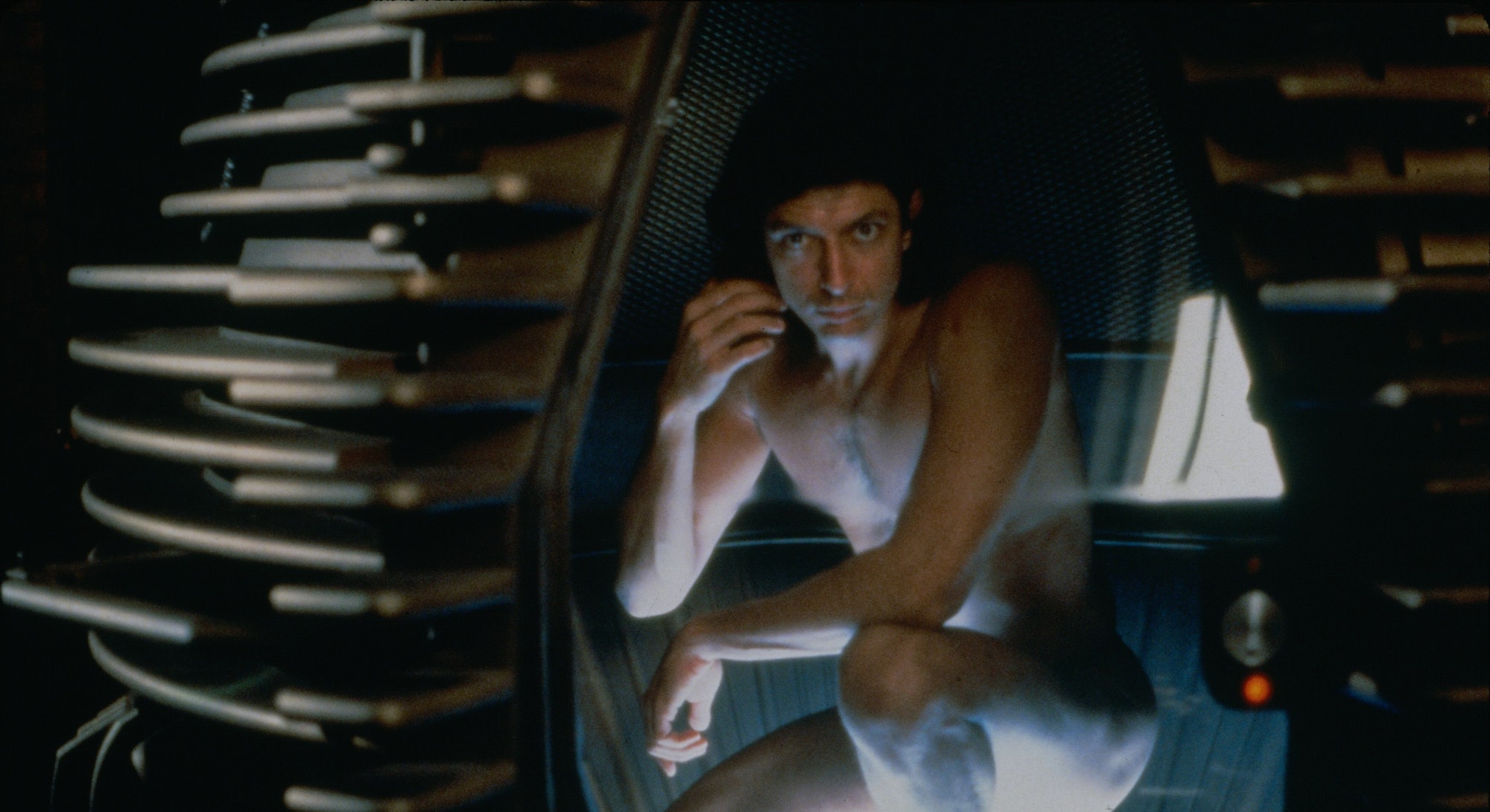 Special effects master Ted Ross is unruffled by The Fly turning 30, though the horror-romance remake’s anniversary also marks a major milestone for him: his very first feature film. He spoke with Inverse over the phone while eating lunch on the set of another horror remake: Stephen King’s It, and confessed the cinematic anniversary didn’t mean much to him. “For me, the movie started in the fall of ‘85. I can’t remember when it actually came out.”

On the set of director David Cronenberg’s iconic horror film, Ross was responsible for the humongous telepods, which he designed, built and operated on set. The telepods, as Seth Brundle (Jeff Goldblum) explains, are a trio of connected egg-shaped containers all connected to a computer, which Brundle uses to disassemble the object in one pod at the molecular level and transport that object into a different pod. The telepods open, close and lock using a circular hinge, and when their doors swing out of place, steam billows from inside them.

“I farm bits and pieces out to the guys who are much more brilliant than I am,” Brundle says in the film. “I say, ‘build me a laser’ this, ‘design me a molecular analyzer’ that. They do, and I just stick ‘em together.” In the world of The Fly, Brundle Frankensteins his system out of disparate parts from other engineers, but behind the scenes of the film, those intricate systems were Ross’s creation.

Ross was also responsible for the shattered-glass effects in The Fly, which came into particular focus when, late in the film, Brundlefly (also Jeff Goldblum) busts into a doctor’s office to kidnap his pregnant girlfriend Veronica (Geena Davis) before she can abort their possibly-mutant fetus. “I remember we had nine separate takes with the glass, going through eight sheets of it until we had a take David [Cronenberg] could use,” Ross said.

Though Cronenberg denied any purposeful ties to specific subject matter, critics have spent three decades calling The Fly an arresting allegory on the AIDS crisis in the 1980s, abortion, drug addiction, and abusive relationships. Potential metaphors aside, it remains one of the most effectively gory horror films ever made, and Ross had a hand in that, too.

Ross remembers the business of concocting The Fly’s gore, though he says he was always too close to its physical production for it to make him feel particularly queasy. “I had flesh and blood being pressurized through a line, mostly thinking to myself, I can’t soak the camera with this,” Ross said. “The technical process is so involved that you don’t even have a chance to feel grossed out. Sometimes I remembering thinking, oh my god, but generally, I felt relieved, because every shot took so much prep work. As Jeff [Goldblum] shed the prosthetics, the legs and all, when the fly is finally breaking out of his body, we all thought, wow, this has been a sick process, but I was just hoping all worked on camera.”

Ross had a very important role in the film’s climax, when a bloody, tortured Brundlefly-plus-telepod places the butt of Veronica’s shotgun to its skull.

“If you look at the dial rotating in the film,” he adds, “that was me hiding, just off camera, throwing a switch, and you know the final shot, when she shoots him in the head? I was such a young member of the crew, and I was the one to press the button and blow the head up. Kind of a disgusting claim to fame, but hey.”

Ross says although he was relatively new to the game, he was well aware of Cronenberg’s artistic prowess upon signing on to The Fly. “We all knew, it had weight, and we were paying attention. Carol Spier was on our team, too, and she’s become a force of nature since. She’s Guillermo Del Toro’s go-to designer now, but back in the ‘80s she called me knowing I could build these big, gnarly telepods, like thousands of pounds each.”

Ross built the telepods off-set, and once they were transported to where The Fly was to be filmed, he boarded a dolly that swung him underneath the set to operate the machines.

“So, you know the sequence where the door hisses, and the latch turns, letting the telepod door swing open? It was a brilliant technical sequence, but unfortunately, I was the guy underneath the machine making that happen, so anytime someone swung the door manually, I’d get smacked in the face because I had the controls underneath,” he explains. “I remember crawling out and yelling, ‘okay, nobody touches this thing without warning me from now on!’”

Blood spurts and explosions like the stunts in The Fly are Ross’s speciality, though he admits he most enjoys getting to blow up a car. “I could talk about intricate blood rigs for hours,” he says, “because sometimes the smaller an effect is, the bigger of a challenge it ends up being.”

Although Ross says the practical effects from The Fly were incredibly difficult to produce, he maintains that the challenge ends up promising a better film. “One thing CGI is good for is erasing the scaffolding of a stunt we have to pull off. In the ‘80s, when we flew people across the set, they were on incredibly thin music wire, with a 2-to-1 safety ratio, which means an actress at 120 pounds would be rigged to enough wire to support 240 pounds. That part, the math and the system of it, I love, but I admit CGI can help in post-production with things like that.”

On the other hand, Ross says he’s seen over-exuberant use of CGI ruin otherwise interesting films, like 2008’s The Incredible Hulk, which he also worked on.

“We had so many incredible, big visuals going on there, all around Ed Norton, and the film should have been great, but when people saw it, well, you can’t help it,” he says. “You see too much CGI and something turns off inside you — you can’t suspend your disbelief that far, and the audience is left cold. I look at all that CGI and I think, ‘wow, what a waste of energy for such a huge team.’”

As for what he can reveal about Andrés Muschietti’s It remake, Ross is understandably tight-lipped. “I will tell you the most difficult thing so far has been getting that little paper boat to float. We spent a month on that alone, those little boats floating in the sewer, and we were all looking at each other, like, ‘how the hell are we going to do this?’” Lucky for horror fans, Ross isn’t likely to turn the problem over to CGI and post-production. Hopefully the practical effects that have held up over decades since The Fly premiered will give It the texture Ross, and most audiences, love so much.