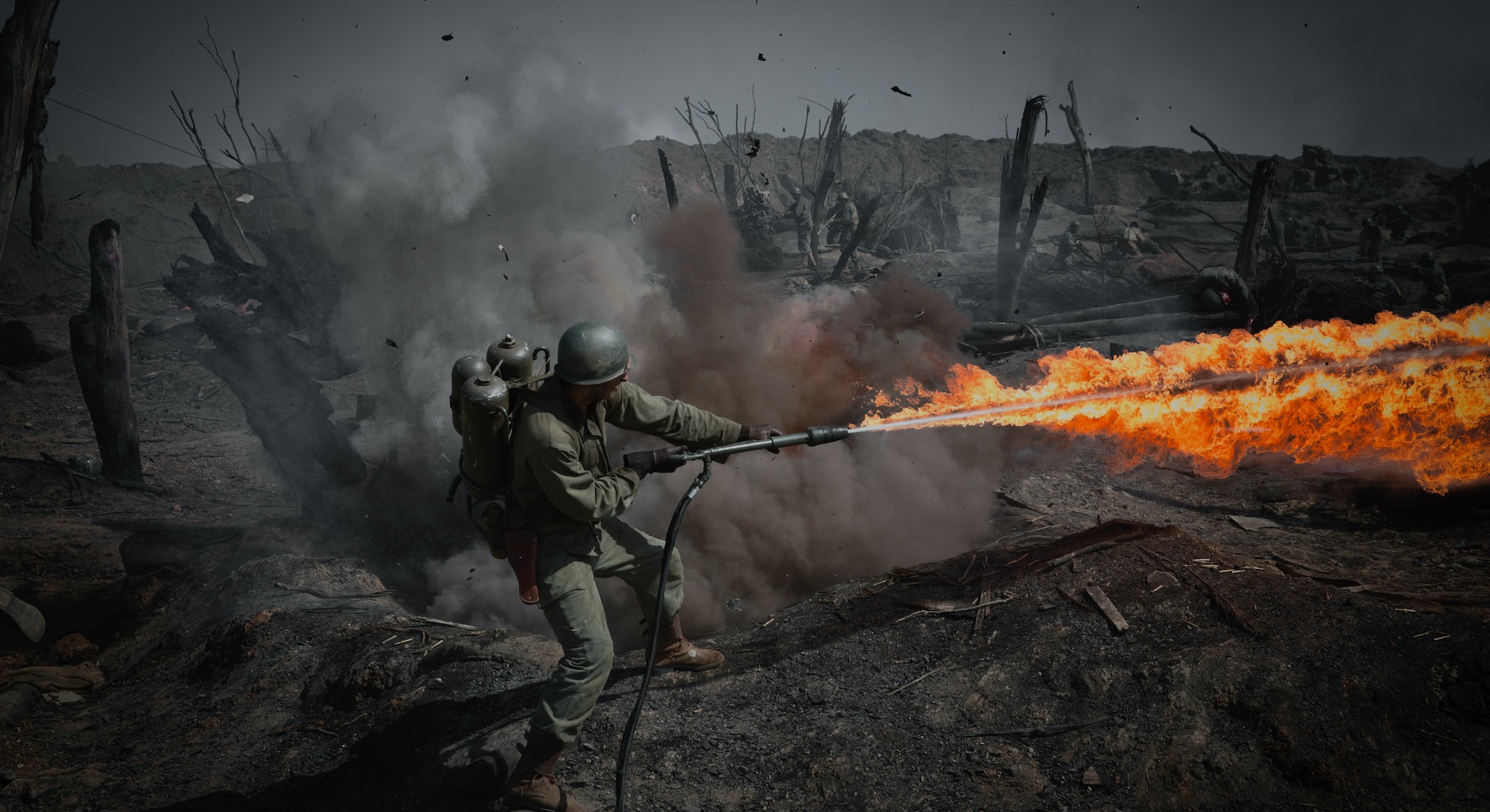 In a particular bloody sequence of Mel Gibson’s World War II drama Hacksaw Ridge, a flamethrower operator’s fuel canister explodes in the midst of brutal fighting during the Battle of Okinawa. Most directors would have opted to achieve this effect safely with CGI. Not Gibson, who went with a practical effect that was staged on location with an actual explosive charge placed on a stunt performer. And that was just one of the many extreme stunts arranged by special effects supervisor Dan Oliver, who previously worked on Mad Max: Fury Road.

On Hacksaw Ridge, Oliver and his team of effects artisans devised gags for that spectacular flamethrower shot along with other devastating body and bullet hits, and several mortar and full-scale explosions, all aimed at communicating the reality of battle.

The flamethrower stunt is spectacular, with the operator and his fuel canister exploding in a ball of fire. Even more impressive was the fact that it was done in a single take: Oliver and his assistant special effects supervisor Lloyd Finnemore collaborated with the stunts team to show the operator actually using the flamethrower, being hit, and being blown up — all in the same shot.

That required some specialized rigging to enable a charge on the stunt performer to safely explode, but still look like it was engulfing him. “We do lots of testing of that with a dummy before any human is involved next to that charge,” Oliver said. We developed what’s called a shaped explosion so we could control the direction of the explosion using custom-built mortars.”

“This means,” he added, “when we packed the explosive on the stunt guy it looks like it’s kind of omni-directional, but really it’s shooting out and away from him.”

The result is the creation of significant heat, but only for a very short amount of time. The camera is placed in a specific way that shows a large fireball even though the actual explosion is emanating away from the performer.

What makes this “trick” possible is the use of dry fuel. A petrol or diesel mix is most common for explosions, but in this instance a flammable powder is relied upon. “When the explosion goes off, all the flammable powder ignites and you get the beautiful fireball with rich black smoke coming off of it,” he said. “Any unburnt flammable powder just falls to the ground, and that way you don’t end up with liquid fuel over the stunt guy and him burning with petrol all over him.”

Of course, the performer was also well-protected for the stunt. He wore a special suit and fire-retardant gel. Still, extra fuel was added to his body. They use fuel with a lower heat of ignition, so you know you’re burning but you don’t burn as hot,” he said.

But there’s even more to the stunt than just the explosion on the performer. The surface around him was also rigged with propane lines to deliver fire on the ground.

“The explosion goes off and the ground continues to burn,” the supervisor explained. “However, we’ve got control over that so that when we hear ‘cut’ we can turn all that off and instantly there’s no fire, and the safety guys can run in, cover him up and basically do what they need to if there’s any residual fire anywhere. It’s all about creating that horrifying image on the battlefield.”

Blood and gore and bullet hits

Oliver’s team would pack in “blood hits” into the actors’ costumes for many of these gags. “It’s as much as we can fit in without making it show too much on the costume,” he said. “The way that works is you have a protective plate, which is a combination of aluminum and leather and foams to protect the stunt person or the performer. And then on top of that plate, you have your very small explosive charge which are especially designed for bullet hits.”

“The little explosive charge goes on top of the plate, and then you’ve got your blood bag, and choosing your blood is important too,” he added. “If you have blood that’s too watery and you overcharge it then you just get spray coming out. If your blood’s too thick and your charge is not strong enough, well then you barely break through the costume and you have this little spurt.”

The enduring allure of practical effects

Although Hacksaw Ridge certainly includes a wealth of digital visual effects, all aimed at enhancing the storytelling, there is a certain aesthetic that comes from the practical nature of the film’s on-set special effects.

One clever way in which special effects were utilized was for smoke to mask out trees and other objects in the background of battlefield scenes (the film was shot in areas of Sydney, Australia). “We had to use a massive amount of smoke to try and mask all the trees,” Oliver said. “If we didn’t then they would have had to paint out those trees every single time, and it can cost a lot of money to do that.”

Then there were more subtle effects such as bullet hits on props and mud and dirt debris being thrown into the air. Oliver also got to implement some massive explosions with high explosives and large fuel charges for a naval bombardment sequence.

Ultimately, a final effect in the film — whether it be a huge explosion or something on a much smaller scale — could be a combination of practical and digital effects. But Oliver says it helps if it has a practical beginning. “Having good visual effects on top of the practical effects is crucial to getting the end result. I think these days the audience doesn’t just want to see constant amounts of visual effects because they know it’s not real. So what you can do is base part of what you’re doing on what is real. I think you get a better end result.”