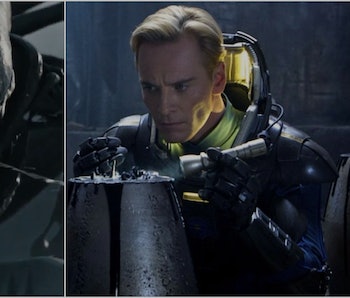 The timeline of the Alien movies is pretty confusing, but it looks like the upcoming Alien: Covenant will go a long way in connecting the original film with 2012’s Prometheus. Fox unveiled new footage at CinemaCon that brought back a Prometheus character for a scene of death and destruction and revealed who really created the Xenomorphs we know and fear.

Spoilers for Alien: Covenant ahead.

According to io9, the footage opens with a spaceship shaped like an upside-down “U” flying over an alien planet inhabited by humanlike beings. We see Michael Fassbender’s character from Prometheus, the android David, piloting the ship. He drops hundreds of the sinister black canisters from that movie down onto the planet’s surface, and they burst, spewing out what’s best described as black, liquid death. It decimates the fleeing populace, eventually exterminating them.

As the footage continues, the audience learns that this planet is the very planet that the doomed crew of Covenant will land on at some point in the future. Then, in some additional footage that was already shown earlier this month, David reveals that he has created the perfect lifeform: a Xenomorph.

There’s still a lot we don’t know about how this all fits together. Presumably, David will run into Walter, the new android Fassbender plays in Covenant.

We’ll find out what’s up when Alien: Covenant premieres on May 19.