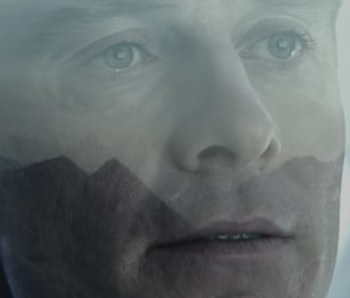 Weyland-Yutani, the company that manufactured robots like Ash, Bishop, and David, have a new model: Walter. A new video set in the Alien: Covenant universe introduces the latest Michael Fassbender robot with a decidedly Westworld vibe. The construction of Walter is so strikingly similar to Westworld ‘s process, one almost expects Anthony Hopkins or Jeffrey Wright to waltz onto the screen.

This isn’t the first time a movie set in the Alien universe has used “viral videos” set inside their own reality. Prior to the release of Prometheus in 2012, several viral videos were released about the Weyland company, including a faux TED talk, and one ad featuring the robot David, also played by Michael Fassbender. Special features from Prometheus later suggested that the robot David, and all other Alien robots, were the descendants of the replicants in Blade Runner. To be clear, Ridley Scott hasn’t ever made that connection explicitly, and has even, occasionally, denied it.

Still, even if there’s no official connection between the Alien robots and the Blade Runner replicants, the new “Meet Walter” video seems to draw more than a little bit of inspiration from the way the Hosts are constructed in a different sci-fi hit: Westworld. The entire tone and look of the “Meet Walter” video has a Westworld aesthetic. His construction is reminiscent of the way the Hosts are made, and the ad has Walter standing in front of a mountainous vista that looks exactly like the park in Westworld.

So, even though fans can’t not be able to totally prove a connection between the Replicants in Blade Runner and the robots in the Alien movies, we can now chew on the vague suggestion (even if on accident) that the Hosts of Westworld have a lot in common with the robots of the Weyland-Yutani corporation. It’s certainly not canon for either universe, at all. but it’s an undeniably awesome idea. To help fuel your Alien/Westworld fan fic, watch the new Alien: Covenant “Meet Walter” video below:

20th Century Fox has also created a website called MeetWalter.com, where you can explore all of Walter’s features including his emotional intelligence, cognitive processing, and his “biosocial compatibility.” This last feature claims that all Walter(s) are “fine-tuned to your specific bio-social stamp,” a new development for robots in the Alien universe.

At least one Walter is set to meet a David unit when Alien: Covenant debuts on May 19.