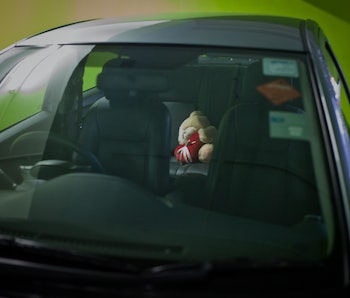 As you may imagine, people leave behind all sorts of bizarre items in transit. Uber has a system that allows you to contact your driver if you make that mistake. But merely providing solutions wasn’t enough; for Uber, these mishaps were simply too bizarre not to document.

So, Uber took some data and created “The Uber Lost & Found Index”. They’re now documenting every lost item in their cars and have identified some patterns: predictably, phones, rings, keys, and wallets are the most commonly lost items. Los Angeles has been designated the “Most Forgetful North American City,” since more objects have been lost there than anywhere else. Items are left behind most frequently on Sundays. October 30 (a Sunday) saw the most lost items of any day in 2016.

Here are the five weirdest things folks have apparently left in Ubers, besides the (reportedly valuable) Nordic walking poles:

Yikes. Not a good thing to forget.

This isn’t even the funniest recent gag related to elves.

Uber did not specify whether it was alive.

This had to have only happened once, right? What’d that guy do to deserve a care package as wonderful as this?

Now go and retrieve that corn hole board you knew you left somewhere.