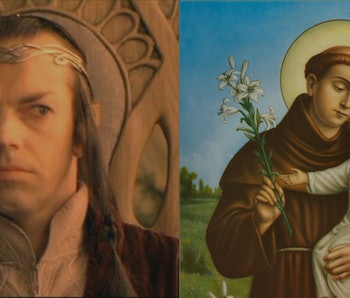 After heading off into the Undying Lands of Valinor, Lord Elrond continued to receive some attention and cries for help, but not from any man, Hobbit, or Orc dwelling in Middle-Earth. The formidable Elf from J.R.R. Tolkien’s Lord of the Rings was mistaken for a Christian saint, and was prayed to on a daily basis by a woman in Brazil.

A Brazilian woman named Dona Nely received an action figure of Elrond from her boyfriend as a gift and assumed it was a statue of Saint Anthony, patron saint of lost or stolen articles. Presumably, the Elrond action figure was gifted out of its identifying Lord of the Rings package.

According to CBS News, Nely prayed to the action figure for years before Gabriela Brandão, Nely’s granddaughter by marriage, noticed that “Saint Anthony” was actually the 6,000-year-old Lord Elrond of Rivendell from Lord of the Rings.

“I Googled the logo on the bottom of the figurine and found out the truth,” Brandão said. “The moment I found out was one of the funniest moments of my entire life. We laughed about it for days.”

Nely’s family has since bought her a new statue, this time making certain it really is Saint Anthony.

It’s unfortunate: Elrond might have enjoyed the attention. The Undying Lands, as beautiful and undying as they probably are, are filled with nothing but immortal beings and ring-bearers in Tolkien’s Lord of the Rings universe. After a life of solving men and dwarves’ problems, and fighting orcs, the perfection of the elves could be a lot to deal with.

Or maybe Elrond’s happy to finally be rid of the influence of man. Either way, at least he gave his worshippers a good laugh.