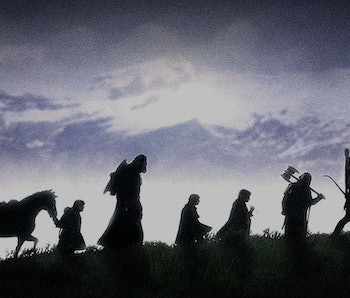 Beren and Lúthien’s love helped save the world. In order to be together, they retrieved one of the Silmaril jewels from the clutches of evil incarnate, putting into motion a prophecy of peace that shaped the entire world of J.R.R. Tolkien’s Lord of the Rings universe, from Bilbo Baggins in the Shire to the darkest corner of Mordor. Their story will be told in Beren and Lúthien, written by Tolkien a century ago and soon to be published in 2017.

With how spectacularly vast Tolkien made Middle-earth, this franchise could go on for decades, for centuries. It already has. The Hobbit was first published in 1937, and that was still years after Tolkien had conceived and created a world far more vast than ever really seen before in a work of fiction. He created cultures, languages, and an entire, long-spanning and detailed mythology that’s just about as hard to get through as it is to travel from the Shire to the Misty Mountains.

The Silmarillion, the fabulous and woefully incomplete history of Tolkien’s world, consists of five essays: “Ainulindal,” “Valaquenta,” “Quenta Silmarillion,” “Akallabth,” and “Of the Rings of Power and the Third Age.” Most LotR fans are somewhat familiar with the fifth and final section. It’s a brief, 20-or-so-page history of the events that led up to The Lord of the Rings: the creation of the Rings of Power, stories of Arnor and Gondor, Elrond’s time with Isildur at Mount Doom — basically everything leading up to the War of the Ring.

But it’s the third part, “Quenta Silmarillion,” that takes up a majority of the collection. Translating to “The Tale of the Silmarils,” this third essay follows the events before and during the First Age. It includes stories such as the introduction of the Elves to the Valar, the angelic beings that helped to create the world, and how the Valar laid siege to one of their own — Melkor — to protect the Elves, as well as the Elf Fëanor’s creation of the three Silmarils from the light of the Two Trees. And so, so much more. But the Silmarils are the real takeaway here despite the insane detail Tolkien goes into with everything else.

Tolkien’s Beren and Lúthien will tell the story of two star-crossed lovers, a Man and an Elf. The Man, Beren, is challenged by Lúthien’s father to retrieve one of the Silmarils from Melkor, which he believes to be an impossible task, in order to prove himself worthy of marrying Lúthien. There are a lot of details involving magical singing, werewolves, and mortality, but let’s not get into that at the moment.

What’s important is that the Silmaril retrieved by Beren and Lúthien from Melkor — remember that it’s one of three — ends up in a fiery pit after leaving Beren’s hand (which is bitten off by the werewolf Carcharoth). Another of the Silmarils is sent to the sky by the Valar to sit amongst the stars, and the third is thrown into the sea.

So, by the time the events of The Hobbit and The Lord of the Rings come about, the light of the Silmarils is visible but unreachable by the people of Middle-earth. The lights act as a kind of reminder of some great, potential future, remaining in all three realms of the world, Arda — the sky, the earth, and the sea.

In most versions of Tolkien’s tellings of the great prophecy of the Silmarils, when Melkor returns for the last time and is defeated in the Dagor Dagorath (The Final Battle), Arda will be changed forever. The three Silmarils will be retrieved from their resting places by the Valar and then broken so that their energy can revive the Two Trees. The light of the Two Trees will then spread across Arda and bring about an era of “eternal bliss.”

And that sounds pretty great, especially after everything Middle-earth and the rest of Arda has been through. And without Beren and Lúthien having retrieved one of the three Silmarils from Melkor, then where would that Silmaril have ended up? It might have still been in Melkor’s clutches and the possibility for all-encompassing peace would be that much further away.

So, basically, Beren and Lúthien’s love saved the world. And that’s the kind of story we’d like to read.

Tolkien’s Beren and Lúthien will be published in 2017.