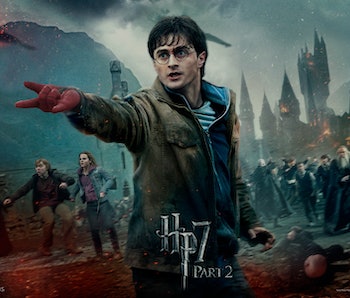 One of the main reasons why the latest film iteration of Spider-Man is being praised as a breath of fresh air is because it seems like Tom Holland and the MCU are really going to take the web-slinger back to his high school roots. In previous Spidey franchises, the scholastic action seemed like little more than a flimsy backdrop, and the characters were played by actors who were much, much older than the characters they were meant to be playing. Holland, meanwhile, is just 20, and many of his peers are also just a few years out from actually being in high school. In a recent interview, Holland said he’d like it if the youthful franchise took its cues from another series that was oriented around the school year: Harry Potter.

Although he told MTV that he didn’t have any input on whatever sequel plans producers and higher-ups were making behind closed doors, he thought that framing each sequel around a school year sounded like the “overall plan.”

“I think the Harry Potter movies are a perfect example. They worked so well,” Holland said. “I’m such a huge fan, as are billions of people, so why not follow that perfect formula? And I think we can do something really exciting with that.”

Later in the interview, Holland said he would love to see Jason Momoa make a little appearance as Kraven the Hunter, but lamented that the actor had been snatched up by DC to play Aquaman. Holland also was surprised to learn about Sony’s recently announced Black Cat and Silver Sable movie, suggesting that the film really won’t have anything to do with Holland’s Spider-Man.