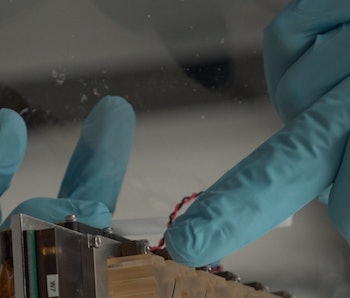 These days, scientists are all about building miniature versions of human organs. They’ve built tiny beating hearts on spinach leaves and put livers on computer chips, and now, a team from Northwestern University report they’ve built a vagina in a palm-sized tablet.

No, the EVATAR doesn’t look like a vagina. But it certainly has one — one that works in conjunction with all of the organs associated with female reproduction, the scientists reported in a new paper in Nature Communications on Tuesday.

Mounted on the EVATAR’s clear block of plastic are finger-length pools filled with various green and blue fluids: These are individual three-dimensional models of the female reproductive system’s parts — the ovaries, fallopian tubes, the uterus, cervix, vagina, and liver — and the strange liquid that pumps through it circuitously is its blood. Lining each of the system’s parts are living human tissues from each of the respective organs.

The question, of course, is why it exists.

Consider this: When scientists currently test medical drugs, their experiments are pretty generic. Using animal models and data from large subsets of people can give them a good idea of how a drug will work on humans in general, but in practice, some people will inevitably react differently — especially across sexes, and within them. What the EVATAR represents is a way to personalize a testing model for individual females with reproductive health concerns: Filling each of its pools with cells from a single female’s organs effectively creates a mini-model of her reproductive system, which the scientists can test on without fear of causing harm.

“It’s the ultimate personalized medicine, a model of your body for testing drugs,” said lead investigator Teresa Woodruff, a reproductive scientist, in a statement. “This will help us develop individualized treatments and see how females may metabolize drugs differently from males.”

Importantly, the EVATAR lets scientists consider the effects of treatment on an entire system — rather than just on a single organ. Each of the organs in the EVATAR interact with each other through hormones and other secreted substances, just like they would in the body. This, Woodruff explains, is where a lot of things go wrong in the female reproductive system. Devastating female diseases like endometriosis, tumors known as fibroids and some cancers are all thought to be caused by abnormal hormone signaling between the organs of the female reproductive tract, and the EVATAR offers scientists a new way of studying these that doesn’t involve experimenting on people.

The palm-sized reproductive system is just one of many hand-held organs that the U.S. National Institutes of Health is supporting in its project to wire together an entire human body via chips. Here’s Chip, the individual representing the project. Woodruff’s work, which she called a “revolutionary technology,” is represented on the right side of Chip’s pelvis — and is one of the crucial pieces of the puzzle to make Chip whole.