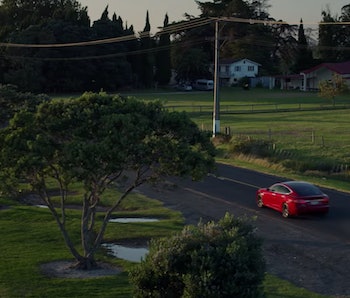 New Zealand’s come into a strange sort of vogue as an apocalyptic refuge for the 1 percent, namely those who made their fortunes in the technology sector. It’s remote, peaceful, and sunny. It’s the Shire. As was described in a fascinating story in the New Yorker, New Zealand is attracting the super-rich, who are buying plots that include landing strips. When the 103,483 square-mile country is cut off from the world’s fossil fuel supplies as global society melts down, electric car company Tesla will be there.

Tesla launched in the country a month ago, but curiously made no mention of Middle Earth’s reputation as a doomsday hideaway. (Probably an oversight.) A video released on Tuesday looked like a celebratory affair, right down to the Maori welcome ceremony and the joyful delivery of eight vehicles, and a “0-100km/h experience on the private docks of Auckland.”

Across the Tasmanian Sea and through the Great Australian Bight is South Australia, where there’s another Tesla plan afoot that could also be deployed to help in any sort of doomsday scenario. The region of the country was facing serious power trouble, but will now invest $113 billion on battery storage facilities to harness the region’s wind power resources. The area is so hot, an entire town lives underground, so solar energy wouldn’t be a problem. But a storm knocked out its electricity infrastructure, causing a massive blackout there in September 2016, with repairs expected to take months. Restoring power has been the source of embarrassing political fights recently.

Lyndon Rive, head of Tesla’s battery division (and Elon Musk’s cousin) recently claimed that Tesla could fix South Australia’s power woes within 100 days of being asked thanks to the stepped up production out of its new Gigafactory in Nevada.

Musk followed up with this tweet: “Tesla will get the system installed and working 100 days from contract signature or it is free.” Musk later noted that he spoke with Premier of South Australia Jay Weatherill who was “very impressed” that the local government “is clearly committed to a smart, quick solution.” There hasn’t been much public movement since March 12, when Musk tweeted, “Just wanted to write a note of appreciation to the many Australians who came out in support of the battery plan.”

Elon Will Visit the Shire

So it remains to be seen if Tesla will eventually run all of South Australia on batteries (filled up by wind and solar energy), but that power method would come in handy. In the event of any large-scale societal unraveling, you’d want to be able to generate your own power from the sun to power your home and your car (of course Musk wants it to be a Tesla.)

So as the company makes inroads in New Zealand, Musk — a noted science fiction and fantasy nerd — was sure to point that the country truly is the real-world Shire. But as anybody who’s read the books knows, eventually the Shire is scoured.

“I know it’s cliche, but [Lord of the Rings] is my favorite book ever,” Musk posted on his Twitter when a New Zealander invited him to the country. “Want to see the set and take my kids on tour of greater NZ.”

More like this
Innovation
17 minutes ago
Are self-driving cars safe? The tipping point rests on a psychological illusion
By Jean-François Bonnefon and The Reader
Innovation
7.1.2022 10:00 AM
Robots are ready to get touchy-feely
By Sarah Wells
Innovation
6.29.2022 6:00 PM
Can cars run on water? The science of a TikTok conspiracy theory, explained
By Andrew Moseman
Share: