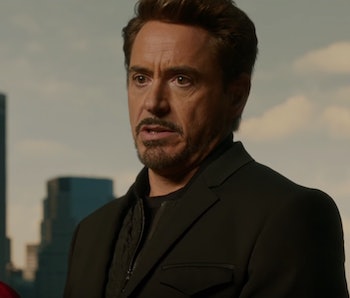 During Spider-Man’s MCU debut in Civil War, Peter Parker told Tony Stark about the important lesson his late Uncle Ben told him. He didn’t use the exact phrasing, for some reason, but the gist of it was the same: “With great power comes great responsibility.” Well, as seen in the second trailer for Spider-Man: Homecoming, Tony’s keeping Uncle Ben’s moral code alive by taking back the high-tech spidey suit after Peter goofs up.

The trailer, which dropped on Tuesday morning, kicks off by showing how badass the suit is and how cool Peter feels in it. Tony, meanwhile, wants Peter to stick to being “a friendly neighborhood Spider-Man,” perhaps feeling guilty that he drew him into a massive hero vs. hero conflict during their last meeting. However, Peter tries to take on the Vulture, an alien tech scavenger with a serious grudge against Stark. They fight, and Vulture splits a Staten Island Ferry in two, prompting Iron Man to swoop in and save the day — and chew out Peter.

“What if someone had died?” Tony asks.

“I was just trying to be like you,” Peter responds, his voice quivering.

“I wanted you to be better,” Tony says, before taking back the suit he gave the young hero. “If you’re nothing without this suit, then you shouldn’t have it.”

Seeing Peter battle Vulture while wearing his old, budget suit is an interesting twist, but Homecoming seems like it’s going to be another bit of great character development for the MCU’s longest-running hero, Iron Man. He started out as a jerk playboy with a heart of gold, but over the course of these movies he’s matured, and he’s trying to steer Peter in the right direction. Because, well, with great power…