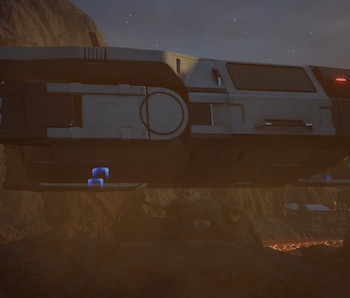 Even though Mass Effect: Andromeda makes Ryder out to be the only person capable of saving the Andromeda Initiative from certain annihilation during the start of the game, there’s another group of do-gooders out having adventures as well. Known as Apex Force, this group of fighters is also working to preserve peace throughout the Andromeda Initiative’s home base while simultaneously heading out into the galaxy to eliminate threats. Throughout Andromeda’s single-player campaign, you’ll be able to send Apex teams out on missions for rewards and resources, but if you’re interested in actually playing these missions yourself, you’ll have the opportunity to do so in multiplayer.

Andromeda’s multiplayer is like Mass Effect 3’s, built around wave-based cooperative play with the added mobility of the jet pack and a wider variety of abilities for each of the characters available. This time around, enemies hit harder and are more aggressive, but if you make it out alive, you’ll get some great rewards for both multiplayer and single-player that make it all worth the trouble. Here are a few tips to help you survive the worst your enemies can throw at you:

Regardless of the enemy type you end up going against in Mass Effect: Andromeda’s multiplayer, you’ll want to focus all your attention on clearing the map of enemy infantry such as Raiders, Assemblers, and Chosen with each passing round. Even though these basic foot soldiers don’t seem like too big of a threat at first, they can tear through your shields and health when allowed to group up around a specific location. This often happens when you’re working together to eliminate a large enemy such as a Fiend or Destroyer with your teammates, because they take a long time to take down no matter the difficulty you’re playing on, giving the basic infantry units the advantage. Dangerous, larger enemies are easy to avoid with a bit of practice, so be sure to pay them no mind and hone in on the little guy shooting at you from a distance.

Each multiplayer match in Andromeda will pit you against seven waves of enemies and objectives you’ll have to work through to walk away successful. On the final round of the match, you’ll be prompted to extract with your teammates and given a specific waypoint to head towards to do so. But since extraction doesn’t happen immediately, you’ll want to make sure your squad hunkers down as far away from the extraction point as possible until the timer reaches 30 seconds remaining. Enemies will always prioritize killing you before overrunning the extraction point in multiplayer, which means luring them away until you can comfortably extract via shuttle is one of the more valuable strategies to practice. This strategy reduces the chance you’ll die in the final seconds of a match and forfeiting your extraction bonus, and it provides your team with a much easier section to defend while you wait since the extraction points are limited when it comes to cover.

Every single character you’ll unlock and play as with your friends in Andromeda’s multiplayer is going to come equipped with five different abilities you can put skill points into; three are active and two are passive. Obviously, active abilities are extremely important to your success on the battlefield, but your passives offer valuable bonuses to your combat effectiveness and survivability that you’ll want to obtain first. When you dive into a new character or re-allocate your skill points on an existing character, put a skill point or two into each active ability before spending the rest to max out each of your passives. This will drastically increase your melee damage, shield regeneration rate, max health points, and more. So, if you’re feeling a little weak compared to the opposition, odds are your lack of passives is the cause.

Pick Characters That Synergize Well Together

Unlike Andromeda’s single-player campaign where you can freely customize your abilities as you see fit, cooperative multiplayer gives you access to an entire roster of characters with preset abilities you can allocate skill points into. Depending on the abilities your character has access to, you’ll have a dedicated role on the battlefield which revolves around priming combos for your teammates or using your combo detonation abilities to set off primers your teammates provide for you. Essentially, these ability combos allow you to deal massive amounts of damage to your opponents in combat, which is a practice you’ll need to get used to if you want to survive. Many of Andromeda’s starting multiplayer characters have a balanced ability set with both primers and detonators, but advanced characters will be focused heavily on one or the other. Balance out your team based on your abilities, making sure that you can always take advantage of each other’s primers and detonators to deal the maximum amount of damage possible.