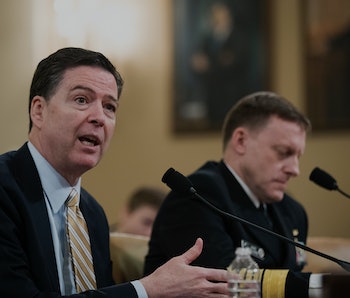 As the story surrounding President Donald Trump’s alleged connections to Russia has grown, its coverage has become increasingly technical.

Likewise, the intelligence gathering procedures of organizations like the NSA and FBI have come under more scrutiny. One such procedure has recently emerged at the forefront of news coverage, “masking and unmasking,” which deals with the treatment by intelligence agencies of American citizens who are caught up in foreign surveillance.

Unmasking procedures emerged as a fixture during last week’s House Intelligence Committee hearing with FBI director James Comey and head of the NSA Admiral Mike Rogers. Several Republican Congressman, like Representative Trey Gowdey, grilled Comey and Rogers on the details of unmasking procedures in connection with the numerous leaks from the federal government that implicated Trump administration officials, such as former National Security Adviser Michael Flynn, in suspicious connections to Russia.

Rogers and Comey’s explanations were enough to pass muster in the House Intelligence Committee, but for many Americans the procedures no doubt seemed grounded in arcane law, and maybe even a little shady to boot.

“Unmasking” Is When a Concealed Identity is Revealed

Masking and unmasking in this context are the set of rules governing how agencies like the FBI or NSA will treat the information of a U.S. citizen if they come across said citizen in the course of surveilling a foreign adversary, and only a foreign adversary. Collections of this nature are done with a warrant from a foreign intelligence surveillance court, as created by the 1978 Foreign Intelligence Surveillance Act (hence the nickname, FISA Court), which does not directly target U.S. citizens.

But just because it doesn’t target Americans doesn’t mean Americans don’t pop up. In those cases, an agency will have what’s often called an “incidental collection.”

Imagine, for example, that the NSA has identified someone and judged them to be a threat to America’s cybersecurity. After obtaining a warrant from a FISA court the NSA can begin to surveil this person via their phone, email, and other means. One day, this foreign agent is caught speaking to or mentioning an individual who is recognized to be an American citizen or entity otherwise related to the United States.

That person has a right to privacy, and therefore they may not be named in internal NSA reporting. They will be referred to simply as a “U.S. Person.” As Rogers pointed out during the House Intelligence hearing, “U.S. Person” is intended to be a broad, catch-all term. It can refer to anything from a single person, to a corporation, to a website — anything registered in the United States. The identity of these entities is masked by default.

When Is an Unmasking Justified?

Unmasking, then, is the process of actually naming this person (or business, or group) in a report, and it cannot be done lightly. According to Rogers’s testimony, there are two criteria that are used for determining whether the unmasking of a U.S. Person is justified.

First, is there a “valid need to know” on the part of the agency or individual requesting the unmasking? If the NSA were to determine that the FBI, when looking into a related matter, would be hindered by not having the identity of this “U.S. Person” unmasked, the NSA will unmask them and give the FBI their identity.

Second, Rogers said, “Is the identification necessary to truly understand the intelligence value the report is designed to generate?” This second criterion is somewhat more subjective than the first. But it should be understood to apply to instances wherein the identity of the “U.S. Person” is integral to understanding the crime or offense that was committed.

Only in these situations can unmasking take place, and there are a limited number of individuals — 20 in the NSA, Rogers said — who can authorize it.

Watch Rogers explain the matter himself in the Intelligence Committee hearing:

Why Does Unmasking Matter?

Anyone in the United States, whether or not we ever know it, could become reliant on the proper applications of these protocols.

Moreover, an understanding of the law and its constituent procedures inoculates against misrepresentations of the law. When, late last week, Representative Devin Nunes, chairman of the House Intelligence Committee, claimed to have come into possession of new intelligence on the Trump transition team, he intimated that names had been wrongfully unmasked in the documents he had. The accusation was widely seen as an attempt to cover for President Trump’s accusations that President Obama had wiretapped his home.

Later reports disputed Nunes’s claim, but the Congressman nevertheless appeared all too eager to capitalize on the shaky national understanding of surveillance protocol. Fully comprehending the laws that politicians often turn against each other would be an asset to the public, which deserves the ability and resources to evaluate for themselves whom they can trust.

More like this
Culture
Feb. 4, 2023
The End of the Cold War Could Have Killed James Bond. Instead, it Made Him Stronger.
By David Grossman
Entertainment
14 hours ago
How The Last of Us Episode 4’s Ending Sets Up a Tragic Subplot — With a Twist
By Dais Johnston
Innovation
16 hours ago
45 of the cleverest things for your home most added to Amazon wish lists
By Mackenzie Edwards
LEARN SOMETHING NEW EVERY DAY.
Related Tags
Share: