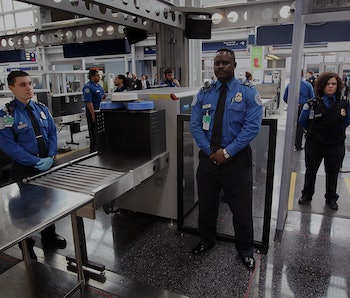 A new, confidential TSA order has been leaked that will be implemented tomorrow: between eight and 10 foreign airlines will now forbid passengers on incoming U.S. flights from carrying most of their electronics; customers will instead need to check them. The rule applies to all devices except cell phones and approved medical equipment and reportedly involves flights originating in 13 Middle Eastern and African countries. Saudia and Royal Jordanian airlines are among those affected, but the full list has not yet been released.

The details of the ruling are unclear, since we weren’t supposed to learn of it until tomorrow. But U.S. officials reportedly told CNN that the ban is a response to perceived weaknesses in certain countries’ airline security processes (that’s a bit rich coming from the TSA, which is infamously ineffective).

In particular, the ruling is supposed to negate a threat posed by Al Qaeda in the Arabian Peninsula (AQAP). Of late, the terrorist organization has been attempting to target commercial airlines by building bombs that contain almost no metal, and thereby avoid setting off detectors. An official told CNN that one of the recent Yemen raids by U.S. Special Forces uncovered information that led the government to believe that this threat is critical and merits preventative action.

The relevant airlines and countries have reportedly been notified and told to keep quiet, though some disobeyed. Royal Jordanian airlines tweeted about the ban before deleting the message a few hours later.

The Department of Homeland Security is expected to reveal the full details of this new requirement on Tuesday, when the ban will also go into effect. For now, except for a cryptic statement to The Guardian, they’re keeping mum: “We have no comment on potential security precautions, but will provide any update as appropriate,” a spokesperson commented, and left it at that.