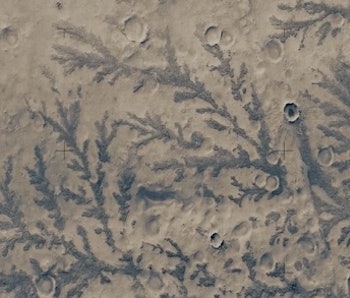 Assuming you live long enough, you won’t have the pleasure of taking in a view of Mars with your own eyes for at least a few decades. Meanwhile, however, you can settle for this video by Jan Fröjdman, and take a fly-over sight of the beautiful red planet from the comfort of your home.

Fröjdman, a space enthusiast and filmmaker from Finland, made this video by splicing together hundreds of images from NASA’s Mars Reconnaissance Orbiter. The orbiter uses a high-resolution camera called the HiRISE to photograph the topography of Mars’s many craters, canyons, valleys, and mountain tops in visible light. It also uses a near-infrared spectrometer to identify the mineral deposits in each area.

The entire project took Fröjdman three months to complete. He started by stitching together the images in 3D blocks. He then panned over the blocks from more than 33,000 points of reference to give it a realistic vibe. Though the images are sent to NASA in black and white, Fröjdman touched them up with a little color by using some of the mineral data from the orbiter. Scientists have debated the actual colors of Mars but, Fröjdman went with a yellow tint for the light regions, a dark bluish tint for the dust, and a white-blue tone for the icy, polar regions.

“I would love to see images taken by a landscape photographer on Mars, especially from the polar regions,” said Fröjdman writes in a description of the video. “But I’m afraid I won’t see that kind of images during my lifetime.”

Even without landscape photos, the video shows us a relatively accurate account of what the first human explorers on Mars will see. But, that won’t be for another 10 to 15 years according to NASA, whose plan is to send humans to the planet’s low-orbit by 2030.