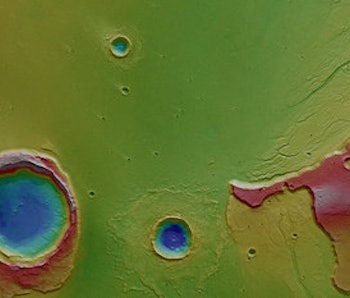 The European Space Agency just released new images of the Kasei Valles channel on Mars. Taken by the Mars Express orbiter, the images show in great detail the geological remains of a planet that once was flowing with bodies of water that may have encouraged life.

The Kasei Valles is a 2,000-mile wide channel system that leads into the Chryse Planitia, which was believed to be a vast flood plain. The mouth of the Valles features several craters, cliffs, plateaus, and other ancient carvings etched out over billions of years. The main crater shown in the new series of aerial images is known as the Worcester Crater.

Worcester is 15 miles wide and looks like an island, but it has withstood millennia of mega floods and erosion, which over time may have ripped away whatever debris was once inside into the Chryse. It’s thought to have once held water — like an aquifer — and when the floods tore through, they pulled that water out of the ground, forming a cavernous skeleton of what once was. Either way, the debris build up around the edges of the craters, is evident that there may have once been water or water-ice in the region. This is significant for scientists still hoping to find history of life on this cold, dead planet.

Scientists believe Mars was once warm and wet for stretches of up to millions of years at a time — long enough to support the evolution of a primitive extraterrestrial life. Using images from the Curiosity Rover of the Gale Crater, which is a completely different region of the planet, they even developed a theory that the planet had a water cycle like Earth’s.

“In the past few decades, we’ve found oceans of liquid water all over the solar system,” Ashwin Vasavada, a project scientist with NASA’s Mars Science Laboratory, told Inverse back in October 2015. “With water required for all life as we know it, the possibilities of life in the past and present have certainly increased. Most of these places have been underground on icy moons of Jupiter and Saturn. But with these discoveries on Mars, we now know that there was a rocky planet in the solar system other than Earth where abundant liquid water was at the surface for millions of years, a time long enough for life to potentially take hold.”

Though Mars still holds many secrets, the Mars Express orbiter and Curiosity rovers are helping scientists unravel them so that one day we may know the fate of our own planet some three billion years down the line.