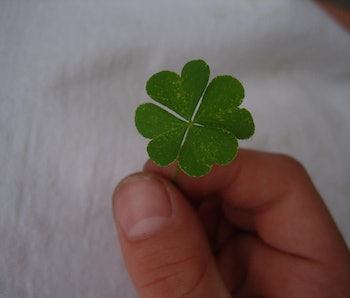 The world could use some good luck these days. Unfortunately, Ireland’s fabled solution — finding a four-leaf clover — remains as hard as ever to pull off this Saint Patrick’s Day. That’s because the difference between three and four leaves is more than just aesthetic: The single leaf that divides them represents the lucky shamrock’s fuck-you to Fibonacci’s celebrated numerical law, which usually doesn’t run into issues forcing nature’s patterns to follow its lead.

A quick refresher on the Fibonacci sequence: Fibonacci was an Italian guy living in the Middle Ages who realized that, when rabbits make babies, they produce them in numbers that conform to a pattern. That pattern — in which each successive number is the sum of the two previous numbers — turned out to not just dictate the growth of bunny populations but an astounding wealth of other patterns in nature, like the spiral of sunflower seeds or the twirl of a head of fractal broccoli. The three leaves of a regular clover are thought to fit into this framework, too.

In 1994, a Swarthmore College mathematician answered a query about the rarity of four-leaf clovers by stating simply, “Four is not a Fibonacci number.” It’s true — the sequence begins 0, 1, 1, 2, 3, 5, 8, 13, 21, and continues indefinitely. The idea behind this statement is that nature seems to favor growth that follows the Fibonacci sequence, and so when a clover sprouts an extra leaf, it does so in defiance of this natural, mathematical law. The world’s wealth of three-leaved clovers tells us that most shamrocks are conformists while the four-leaved ones are renegades.

Of course, nature doesn’t always follow Fibonacci’s sequence. Four-leaved plants like the fuschia exist, as do four-chambered bell peppers; relatedly, five is a Fibonacci number, but we certainly don’t see five-leaved clovers all that often. It’s not entirely clear why it occurs so often in nature, but the most likely explanation is that growth that follows Fibonacci patterns optimizes efficiency: The spacing of leaves on a three-leaf clover might, for example, maximize the amount of light each leaf gets, while leaves on a four-leaf clover might be too crowded to do the same.

Adherence to the Fibonacci law seems to be written in an organism’s DNA. In 2010, scientists reported in the journal Crop Science that they’d pinpointed the gene responsible for the four-leaf trait in clover, which began a new era in the cultural significance of the four-leaf clover. Now, people can order clovers with multiple leaves online, but it remains to be seen whether the genetically modified shamrocks are as lucky as their rare, naturally occurring kin.