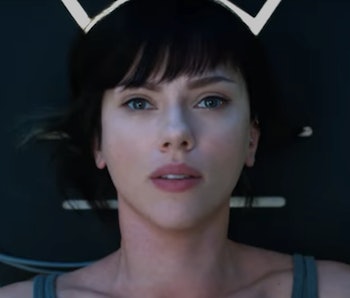 The first new spot titled “Anything” paints this future as a place the “world has woken up to cyber-enhancement.” But the dark side of this is a euphemistically evil-sounding “they,” who can hack into everyone’s biologically integrated accouterments, effectively taking over people’s bodies and turning them into cyber-zombies. Think of it like an extended version of the concept of hacking people’s phones for surveillance, only with entire human bodies. Because the tech of the Major’s upgraded cyber-body is connected to this kind of networking, her susceptibility to this kind of control seems unclear. If the baddies who put her soul into a robot body can control other people through remote control, can’t they control her too?

The second new spot lists the Major’s various powers, making her essentially sound like a super solider badass. However, one character mentions that he can “see like her,” which seems to imply the Major will have a kind of hunter-tracker vision akin to one of the T-800 from the Terminator movies. This vision seems to be awash in red light, meaning after becoming fused with her cybernetic body, the Major’s vision is more “robotic,” too. This begs the question, in a three way battle between the T-800, RoboCop, and the Major, who would emerge victorious? How has this question never been asked before?

Ghost in the Shell, complete with Terminator vision, opens on March 31 everywhere.