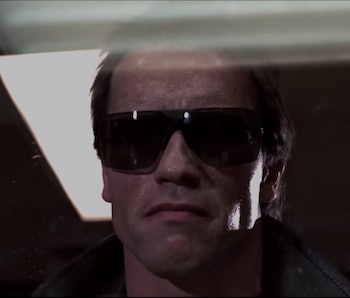 The first trailers for the fifth movie in the Terminator franchise, Terminator Genisys, seemed to be filled with nothing but catchphrases. So in honor of the new movie being released in theaters tomorrow we decided to take a look at some of the most iconic lines from each movie in the series.

15. “Come with me if you want to live.” - Kyle Reese, Terminator Salvation

This represents the nadir of self-referential pap, and that says something even coming from the series’ worst installment. The low points of these movies have a bad habit of not trying new things and simply digging up old lines to remind you this is a Terminator movie. This kind of thing isn’t earned, it’s just blatant fan service.

See above. With Terminator Salvation it seemed like the filmmakers just tried desperately to crib as much as they could from the earlier movies, including the iconic lines. But simply rehashing a script doesn’t improve on it. This line, I fear, will be back again and again.

Our first Arnold appearance on the list is his worst. Terminator 3: Rise of the Machines was a valiant but unnecessary retread of possibly every story beat from the first and second movies, carried out with less skill in almost every sense. Changing of the iconic line to “she’ll be back,” referring to the film’s villainous female Terminator, attempts a playfulness that falls flat.

Dated and cheesy, this line plays with the idea of the T-800 assimilating into society, something T2 did with aplomb. It’s a retread minus the cleverness. Still, it’s worth a chuckle.

People seemed to be genuinely anticipating this line during the 12 years between the second and third movies. Oddly, there’s something satisfying about the switch from the future tense to the present tense.

Now we’re getting into the good stuff. This is a line that encapsulates just how much Sarah Connor changed since the first movie. Then, an innocent teenager working at a burger joint. Now, a badass with the potential to break your knee in about five places before you hit the ground. She’s a killer with the weight of total human annihilation resting on her shoulders. Linda Hamilton’s feral-eyed delivery really hits it home.

This is a better version of what the filmmakers in the third movie tried with “talk to the hand.” Schwarzenegger’s robotic diction makes it funny and illustrates how hopeless his cyborg is at trying to pass for fully human.

This one just makes you want to stand up and give Arnold a round of applause. It comes at a moment where Sarah doesn’t know that the T-800 has been reprogrammed to protect her and her son, and again it’s Hamilton’s eyes that do most of the emotional work. The Terminator is a thing that ruined her life, and this line that she’s heard before (more on that later) lets her know that now it’s the only thing that can protect her.

Win a trivia bet with this one: Ahnuld’s first spoken line as the ultimate robotic murder machine was “Nice night for a walk.” After that, he wastes no time with these punks (including Bill Paxton with sick spiky blue hair and tire-tread makeup on his face). He gets the clothes and gets on with things. Dude gets things done.

The second movie’s riff on a similar line from the first one, and Arnold makes it work by delivering it completely straight — more of that robotic acting coming in handy. Something about his Austrian accent saying “motorcycle” just makes this one memorable too.

5. “Come with me if you want to live.” - Kyle Reese, The Terminator

This is another epic original. At this point in the first movie both the T-800 and Kyle Reese have been stalking Sarah Connor, and we’re not really supposed to know who’s who, but Reese gets his heroic moment after he unloads a few shotgun blasts into the Terminator in the middle of the hilariously named club Tech Noir (here’s hoping it’s still open in L.A.) allowing him and Sarah to flee, kickstarting the whole saga.

If you just killed a robot cyborg that was sent back from the future to kill you, this would most likely be your reaction too.

This is the second time the T-800 utters the iconic line in T2, but in this case the second time’s a charm after he uses it as a big F-U to the T-1000, shattering him into a million pieces with a single gunshot. Never before has an Austrian speaking Spanish sounded so badass.

The line is a great echo of the original movie, though here it’s a straight up heroic moment that comes during the epic Cyberdyne escape sequence. Arnold’s accent propelled this as a catchphrase, but those three little syllables made it go viral.

Colder than his metal skeleton. It takes a certain kind of performance to make you root for the bad guy, and with this single line Schwarzenegger seemed to cement his place in the pantheon of cinematic badasses. Apparently the actor wanted to say “I will be back” because he thought the T-800 wouldn’t use a contraction, but director James Cameron vetoed the idea in favor of the easier soundbyte. People usually forget that moments after he utters this line he drives a car straight through the front door of a police station. He’s a man — or cyborg — of his word.

More like this
Entertainment
Feb. 1, 2023
In Knock at the Cabin, a Terrific Dave Bautista Saves M. Night Shyamalan From Himself
By Hoai-Tran Bui
Entertainment
Jan. 26, 2023
Attack the Block sequel will take a page from the two greatest sci-fi sequels, director says
By Eric Francisco
Entertainment
Jan. 25, 2023
Infinity Pool is a hedonistic head-trip
By Isaac Feldberg
LEARN SOMETHING NEW EVERY DAY.
Related Tags
Share: