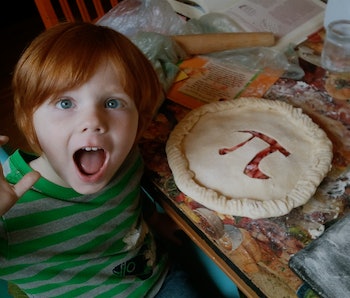 On March 14, or 3/14, mathematicians and other obscure-holiday aficionados celebrate Pi Day, honoring π, the Greek symbol representing an irrational number that begins with 3.14 Pi, which schoolteachers everywhere repeat, represents the ratio of a circle’s circumference to its diameter.

What is Pi Day, and what, really, do we know about π anyway? Here are three-and-a-bit-more articles to round out your Pi Day festivities.

Why Is Pi Day a Holiday?

First off, a reflection on this “holiday” construct. Pi itself is very important, writes Professor of Mathematics Daniel Ullman of George Washington University, but celebrating it is absurd:

The Gregorian calendar, the decimal system, the Greek alphabet, and pies are relatively modern, human-made inventions, chosen arbitrarily among many equivalent choices. Of course a mood-boosting piece of lemon meringue could be just what many math lovers need in the middle of March at the end of a long winter. But there’s an element of absurdity to celebrating π by noting its connections with these ephemera, which have themselves no connection to π at all, just as absurd as it would be to celebrate Earth Day by eating foods that start with the letter “E.”

And yet, here we are, looking at the calendar and getting goofily giddy about the sequence of numbers it shows us.

Why We Still Can’t Get Enough Pi

Come to think of it, pi can indeed be a source of great pleasure. Apple’s always comforting, and cherry packs a tart pop. Chocolate cream, though, might just be where it’s at.

Where Is Pi Relevant?

Of course π appears in all kinds of places that relate to circles. But it crops up in other places, too – often where circles are hiding in plain sight. Lorenzo Sadun, a professor of mathematics at the University of Texas at Austin, explores surprising appearances:

Pi also crops up in probability. The function f(x)=e-x², where e=2.71828… is Euler’s number, describes the most common probability distribution seen in the real world, governing everything from SAT scores to locations of darts thrown at a target. The area under this curve is exactly the square root of π.

The History of Pi

If you want to engage with π more directly, follow the lead of Georgia State University mathematician Xiaojing Ye, whose guide starts thousands of years ago:

How the Pi Symbol Was Cooked Up

And because π is irrational, we’ll irrationally give you even one more, from education professor Gareth Ffowc Roberts at Bangor University in Wales, who highlights the very humble beginnings of the symbol π:

After attending a charity school, William Jones of the parish of Llanfihangel Tre’r Beirdd landed a job as a merchant’s accountant and then as a maths teacher on a warship, before publishing A New Compendium of the Whole Art of Navigation, his first book in 1702 on the mathematics of navigation. On his return to Britain he began to teach maths in London, possibly starting by holding classes in coffee shops for a small fee.

Shortly afterwards he published “Synopsis palmariorum matheseos,” a summary of the current state of the art developments in mathematics which reflected his own particular interests. In it is the first recorded use of the symbol π as the number that gives the ratio of a circle’s circumference to its diameter.

What made him realize that this ratio needed a symbol to represent a numeric value? And why did he choose π? It’s all Greek to us.

Editor’s note: The following is a roundup of archival stories.

This article by Jeff Inglis was originally published on The Conversation.

More like this
Science
7.5.2022 12:00 PM
The greatest dinosaur sci-fi franchise ever reveals a problematic genetics debate
By Andrew Maynard and The Conversation
Culture
1 hour ago
64 years ago, Hollywood made the most rip-roaring Viking movie ever
By Emil Stern
Mind and Body
7.1.2022 8:00 PM
How to spot a liar using a classic mathematical trick
By Dorje C Brody and The Conversation
Related Tags
Share: