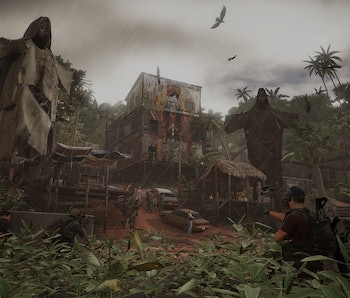 In many ways, Ghost Recon Wildlands is Ubisoft’s first earnest attempt at redefining the classic Ghost Recon experience — and it’s already established the franchise as one of Tom Clancy’s best. Instead of trying to create a linear single-player campaign mixed with a cohesive multiplayer experience, Ubisoft Paris aimed at incorporating an open world design that’s worked so well for other Ubisoft games. Regardless of how you approach Ghost Recon Wildlands, the game is focused on eliminating the Santa Blanca cartel in a co-operative environment across multiple regions; you’ll be clearing enemy camps, creatively using the vehicles given to you to wreak havoc, and interrogating targets for information, all to help you crush the cartel’s strongest members. But no matter how comfortable you feel with the tried-and-true third-person shooting mechanics of Wildlands, the best way to experience Bolivia with your friends is by cranking up the difficulty to Extreme.

Unlike its predecessors, Ghost Recon Wildlands is very accessible to new players unfamiliar with the franchise. Most enemies throughout the game, no matter how heavily armed, are relatively easy to deal with on easier difficulties; you can pretty much just rush into an enemy encampment with average weapons or attack vehicles without a care in the world if you really wanted to.

Unlike The Division, Ghost Recon Wildlands was built to be a more straightforward third-person shooting experience without incorporating role-playing mechanics. While you’ll still level up a skill tree and unlock additional equipment, nearly every bullet you fire is just as effective as the one your friend fires next to you, because most enemies will drop after being shot once. On occasion, heavily armored targets require a little more work to eliminate, but the same principle remains true: a single bullet will kill any hostile target you engage on foot, provided you connect with a weak spot like the head or chest.

Since the enemies in Ghost Recon Wildlands aren’t very keen when it comes to detecting you or working out where incoming fire is coming from, eventually you’ll hit a repetitive cycle where you and your squad tag hostile targets in one of the game’s many locations only to run in without thinking to eliminate them all with a hail of gunfire. There is none of the tactical planning that the game was designed for — and more importantly, there’s absolutely no danger unless you fail to stop reinforcements. Sure, it’s fun to roll through the first few times you encounter enemies taking dozens of incoming bullets like a gigantic military sponge, but boy does it start to wear on you rather quickly.

That’s where the higher difficulties in Ghost Recon Wildlands come into play, introducing increased enemy damage, weapon, accuracy and overall responsiveness in combat. For Extreme, the goal was to develop a highly tactical experience for fans of the original Ghost Recon where completely disregarding planning and co-ordination would always result in immediate failure. On both harder difficulties, Ghost Recon Wildlands feel like a tactical simulator where every bullet you fire can alert an entire enemy base of your presence, and an open firefight against a heavily armed group of Santa Blanca’s finest is a pulse-pounding experience.

For example, there’s a small rebel village in the north of Itacua called Culta, and it’s occupied by the Santa Blanca cartel. During my time with the closed beta of Ghost Recon Wildlands, I approached this village on Normal difficulty with some friends where we proceeded to go through the village from building to building and quickly pick off every hostile to retrieve our target from the church in about five minutes or so. But, in the full version of the game, while playing on Extreme difficulty, things played out a little differently.

Instead of simply rushing through the village, my friend and I knew we would be spotted the moment we came into the enemy’s line of sight. So, we opted to split up, with him sitting on a vantage point overlooking the entire village, guiding me through as I crawled with a silenced rifle. All-in-all, the process took around 15 minutes as he told me which hostiles I could eliminate without being spotted and which I had to avoid to keep from alerting the entire village; eventually, I ended up in the church and retrieved our target without being detected. It was intense, thrilling, and best of all, it felt like a significant achievement, one which I’m hoping we’ll be able to do more of.

The extra level of challenge provided by Extreme difficulty gives every major encounter in Ghost Recon Wildlands a greater sense of urgency that brings the tactical, satisfying challenge of classic Ghost Recon to life. So, if you’re finding the world of Wildlands to be a little too repetitive or boring after clearing a few provinces, consider bumping up the difficulty to change your encounters into something with a little more meaning.