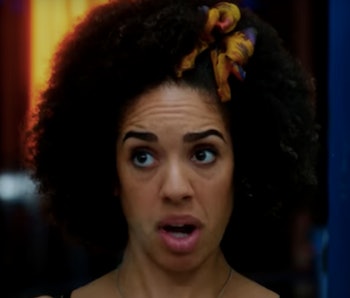 If fans were hoping that the latest season of Doctor Who was going back to basics, then the latest trailer definitely teases a new season which will be lighter on internal mythology than the last several years of the show. The trailer is also the first glimpse we get of Missy this season, who looks pretty much just as evil as she has in previous seasons, thankfully.

Like all the previous preview footage of Season 10, Pearl Mackie’s new character, Bill, dominates the majority of the action in this new trailer. Whether she’s encountering a robot that speaks in emoji or enthusiastically calling the TARDIS a “kitchen,” Bill is easily set to be the bright spot of all of these new adventures. If fans thought the two previous runs of Capaldi’s era as the Doctor were too gloomy, Bill is bringing back a solid amount of lightheartedness and much-needed freshness. She’s nothing like Clara, and maybe, not even like Rose.

On the nerdy canon front, other than Missy, there’s one glimpse of those much-discussed old-school Cybermen as well as Nardole catching what looks to be one of the old sonic screwdrivers wielded by the 3rd and 4th Doctors back in the ‘60s and ‘70s. Why would the Doctor have yet another old sonic screwdriver? Will he be meeting some retro versions of himself later in the season?

Doctor Who debuts on BBC and BBC America April 15.